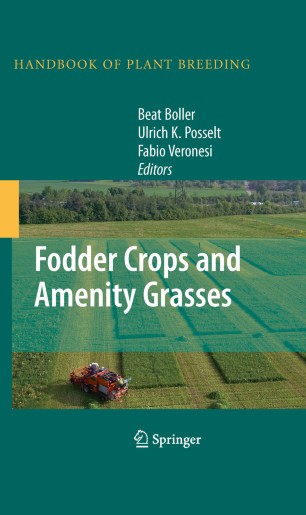 Grassland provides the forage basis to feed ruminant animals for the production of meat and milk ever since their domestication. With the introduction of improved crop rotations at the end of the sixteenth century, grasses and legumes began to be also grown to an important extent as forage crops on arable land. In the last decades the importance of amenity grasses increased markedly, due to the demand of the society for new usages like landscape protection.

Some milestones in forage crop breeding since it’s beginning around 1900 were the invention of the polycross leading to the replacement of open pollinated varieties by synthetic varieties, progeny testing, breeding of amenity grasses, induction of tetraploidy in the ryegrasses and red clover, and the introduction and application of molecular tools. The invention of the forage plot harvester, computers, NIRS and other new technologies have led to a tremendous increase in breeding intensity.

The aim of "Fodder Crops and Amenity Grasses", the fifth volume in the book series "Handbook of Plant Breeding", is to collect current knowledge in breeding research to serve breeders as well as researchers, students, but also their academic teachers. It may be regarded as a scientific knowledge platform which provides practical plant breeders with new scientific information, but also to make molecular biologists more familiar with the peculiarities of breeding the various species of fodder crops and amenity grasses. Because forage crops have many topics in common and to avoid redundancy, the volume starts with 9 general chapters devoted to: the role of forage crops in multifunctional agriculture, genetic resources, breeding methodology, molecular tools, breeding objectives in forages as well as amenity grasses, breeding for seed yield, variety testing and release, and an outlook into the future. The second part comprises the 9 most important groups of temperate species among the grasses, clovers and alfalfa. The chapters have been written by outstanding breeders and scientists with wide experience in their crops and topics.

They are the acting (BB), past (UKP) and past-past (FV) chairman of the section ‘Fodder Crops and Amenity Grass Breeding’ of EUCARPIA, the European Association for Research on Plant Breeding.

Beat Boller is a clover and grass breeder at Agroscope Reckenholz-Tänikon in Zürich, a research station of the Swiss Federal Department of Economic Affairs. Between 1989 and 2009, he created and released 60 registered cultivars of 11 species, including red and white clover, ryegrasses, fescues, and cocksfoot, which are listed in many European countries. He also has wide experience in genetic resources of forages, having acted as chairman of the Forages Working Group of ECPGR between 2002 and 2007. Since 2008, he is President designate of EUCARPIA.

Ulrich K. Posselt is a research plant breeder and was head of the forage research group at the State Plant Breeding Institute of the University of Hohenheim until his retirement in 2008. His research activities were on the ryegrasses and mainly devoted to breeding methodology, disease resistance, application of biotechnological techniques and molecular tools. This lead to more than 50 scientific publications in reviewed journals and conference proceedings. He was involved in teaching forage crop breeding and training of Ph.D. and MS students.

Fabio Veronesi is professor of plant biotechnologies and chair of the MS degree in human feeding and nutrition sciences at University of Perugia., where he is also in charge of the PhD program in botany and agroenvironmental, animal and food biotechnologies. His research activities have been mainly devoted to forage plant breeding (with special emphasis for alfalfa), meiotic mutations, transformation technologies applied to alfalfa, germplasm collection, conservation and evaluation, environmental and human impacts of genetically engineered plants. This lead to more than 70 technical papers in reviewed journals.