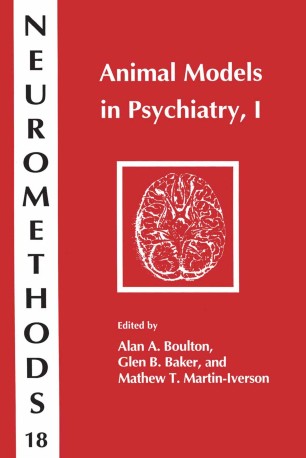 Animal Models in Psychiatry, I

The two Animal Models in Psychiatry volumes are loosely organized by subject. The first volume contains a number of chapters concerned with schizophrenia, psyc- ses, neuroleptic-induced tardive dyskinesias, and other d- orders that may involve dopamine, such as attention deficit disorder and mania. The second volume deals with affective and anxiety disorders, but also includes chapters on subjects not easily classified as either psychotic, or affective, or an- ety-related, such as aggression, mental retardation, and memory disorders. Four chapters on animal models of schizophrenia or psychoses are included in the present v- ume because of the importance of these disorders in p- chiatry. Likewise, three chapters in the subsequent volume deal with depression. The first of the two volumes begins with an introd- tion by Paul Willner reviewing the criteria for assessing the validity of animal models in psychiatry. He has written - tensively on this subject, and his thorough description of the issues of various forms of validity provides a framework in which to evaluate the subsequent chapters. As will be seen, the remaining chapters in both volumes will refer frequently to these issues. The second chapter, by Melvin Lyon, describes a large number of different procedures that have been p- posed as potential animal models of schizophrenia. This is a departure from the usual format, consisting of detailed - scriptions of specific models.