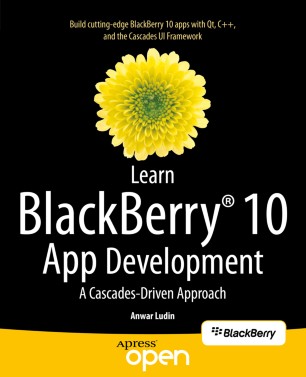 Learn how to leverage the BlackBerry 10 Cascades framework to create rich native applications. Learn BlackBerry 10 App Development gives you a solid foundation for creating BlackBerry 10 apps efficiently. Along the way, you will learn how to use QML and JavaScript for designing your app’s UI, and C++/Qt for the application logic. No prior knowledge of C++ is assumed and the book covers the fundamental aspects of the language for writing BlackBerry 10 apps. Also a particular emphasis is put on how to create a visually enticing user experience with the Cascades framework, which is based on Qt and QML.

Starting with the native SDK configuration and an overview of the Momentics IDE, the book is fast-paced and you will rapidly learn many of the best practices and techniques required for developing beautiful BlackBerry 10 apps.

Learn BlackBerry 10 App Development is written for developers wishing to learn how to write apps for the new BlackBerry 10 OS and those interested in porting existing iOS and Android apps to BlackBerry 10 as native applications.

Anwar Ludin is the founder of RiskCetera.com, a cloud-based market risk analytics platform. He currently uses the Intel compiler tools and performance libraries in order to build a high performance derivatives pricing engine that he intends to open source. Prior to founding RiskCetera, he worked as a software engineer in the financial services sector where he designed derivatives pricing engines. Anwar holds a Masters of Electrical Engineering degree from the Swiss Federal Institute of Technology.