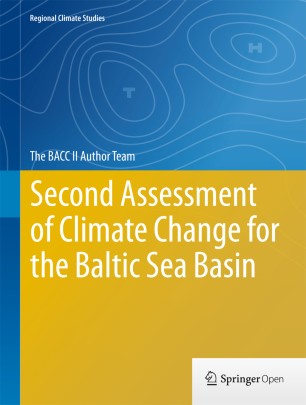 Second Assessment of Climate Change for the Baltic Sea Basin

This book is an update of the first BACC assessment, published in 2008. It offers new and updated scientific findings in regional climate research for the Baltic Sea basin. These include climate changes since the last glaciation (approx. 12,000 years ago), changes in the recent past (the last 200 years), climate projections up until 2100 using state-of-the-art regional climate models and an assessment of climate-change impacts on terrestrial, freshwater and marine ecosystems. There are dedicated new chapters on sea-level rise, coastal erosion and impacts on urban areas. A new set of chapters deals with possible causes of regional climate change along with the global effects of increased greenhouse gas concentrations, namely atmospheric aerosols and land-cover change.

The evidence collected and presented in this book shows that the regional climate has already started to change and this is expected to continue. Projections of potential future climates show that the region will probably become considerably warmer and wetter in some parts, but dryer in others. Terrestrial and aquatic ecosystems have already shown adjustments to increased temperatures and are expected to undergo further changes in the near future.

The BACC II Author Team consists of 141 scientists from 12 countries, covering various disciplines related to climate research and related impacts. BACC II is a project of the Baltic Earth research network and contributes to the World Climate Research Programme.