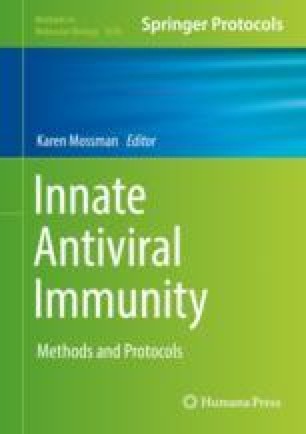 Sensing of cytoplasmic DNA by cGAS is essential for the initiation of immune responses against several viruses. cGAS also plays important roles in some autoinflammatory and autoimmune diseases and may be involved in immune responses targeting cancer cells. Once activated, cGAS catalyzes the formation of the di-nucleotide 2′-3′-cyclic GMP-AMP (cGAMP), which propagates a signaling cascade leading to the production of type I interferons (IFNs). Interestingly, cGAMP is incorporated into enveloped viruses and is transferred to newly infected cells by virions. In this article, we describe a method to purify cGAMP from viral particles and a bioassay to measure its activity. This assay takes advantage of a reporter cell line that expresses the genes encoding green fluorescent protein (GFP) and firefly luciferase under the control of the IFNß promoter, allowing the testing of several samples in a single experiment taking not more than 3 days.

Sensing of foreign DNA plays a central role in the detection of viral infections by the immune system. In healthy cells, DNA is restricted to specialized compartments, namely the nucleus and mitochondria. Presence of DNA in other subcellular compartments is detected by specific receptors and triggers different signaling cascades, some of which culminate in the secretion of type I IFNs. These cytokines in turn act on the infected cell and on neighboring cells to induce an antiviral state, leading to a reduction in viral replication and spread. Type I IFNs also play roles in the activation of the adaptive immune response and therefore are crucial to the successful defence of the host against viruses.

In 2013, Sun et al. discovered that the presence of DNA in the cytosol is sensed by the cyclic GMP-AMP synthase (cGAS) [1]. Instead of signaling via protein-protein interactions as often seen for other sensors of virus presence, cGAS—once activated—catalyzes the synthesis of the di-nucleotide 2′-3′-cyclic GMP-AMP (hereafter simply cGAMP). cGAMP acts as a second messenger and activates the endoplasmic reticulum -bound secondary receptor STING [2]. Interestingly, STING is also activated by the bacterial dinucleotides cyclic-di-GMP and cyclic-di-AMP [3, 4]. The interaction of cyclic di-nucleotides with STING induces a change of its conformation, which results in recruitment and activation of the kinase TBK1 and the transcription factor IRF3. Once phosphorylated by TBK1, IRF3 dimerizes and translocates to the nucleus to induce the expression of type I IFNs. An interesting feature of this signaling pathway is that cGAMP—being a small molecule—can diffuse from cell to cell via gap junctions [5]. This allows rapid propagation of the signal in cells connected by gap junctions as soon as one cell is infected. Another consequence of cGAMP’s nature as a small, diffusible molecule is that it can be incorporated into enveloped viral particles during budding and is transferred from one cell to another cell by viruses [6, 7]. This may allow newly infected cells to respond faster during secondary rounds of infection.

The cGAS pathway not only plays a critical role in the initiation of immune responses against several DNA viruses (including Herpes viruses, Vaccinia virus, adenovirus, Hepatitis B virus, mouse, and human cytomegaloviruses), retroviruses (including HIV), and bacteria (including Mycobacterium tuberculosis), but also in antitumor immunity [8, 9]. Of note, injection of cGAMP directly into solid tumors enhances the immune response targeting both the injected tumor and distal tumors [10, 11]. Moreover, cGAMP has been successfully used as an adjuvant in several vaccination models [12, 13, 14]. However, uncontrolled activation of cGAS by endogenous ligands can also lead to the development of inflammatory pathologies such as Aicardi-Goutières Syndrome [8, 9].

Because of the central role of cGAS in the development of immune responses in a broad range of pathological conditions, measuring its product, cGAMP, is important in studies aimed at understanding the physiopathology of infectious and inflammatory diseases. The methods currently available to detect cGAMP are (1) reverse phase HPLC followed by tandem mass spectrometry analysis [2, 6, 7, 15, 16] or by NMR spectroscopy [15, 17, 18] and (2) bioassays in which the activation of STING is assessed after incubation of mildly permeabilized cells with samples containing cyclic dinucleotides [2, 3]. The first approach may be more sensitive, but it also requires specialized equipment and expertise and has limitations in terms of the number of samples that can be processed. Bioassays have the advantage of being fast and requiring only standard tissue culture facilities, and can also be adapted to large sample numbers. Importantly, bioassays also provide information on the biological activity of the tested samples, and can therefore be used not only to detect the presence of cGAMP, but also to test the ability of different cellular, viral, or synthetic components to modulate STING signaling.

In this chapter, we describe a step-by-step protocol to purify cGAMP from viral particles and a bioassay to detect and quantify its activity. The method for small molecule extraction from virions was adapted from [16]. Briefly, viral particles are lysed in a buffer containing 1% Triton X-100 and nucleic acids are degraded by the treatment with an endonuclease that degrades both DNA and RNA (benzonase). Proteins are then removed by two successive rounds of phenol-chloroform extraction, followed by a chloroform wash to remove all traces of phenol. The extract is then filtered through a 3 kDa centrifugal filter and the filtrate is concentrated by centrifugation under vacuum. With this method, we typically recover 36% of the cGAMP present in the original sample. The bioassay used to quantify cGAMP activity has been adapted from [2, 3] and takes advantage of a reporter cell line we have generated. These cells were derived from the monocytic cell line THP-1 and express firefly luciferase and GFP under the control of the human IFNß promoter. Overnight incubation in the presence of PMA induces the differentiation of these THP-1 reporter cells into macrophage-like cells. This step is important to increase the sensitivity to stimulation with cGAMP. The bioassay involves incubation of the cells with samples diluted in an isotonic buffer containing a very low concentration of digitonin. This mild detergent causes the formation of small holes in the plasma membrane, such that small molecules can diffuse into the cell but proteins and intracellular organelles stay in place (Fig. 1a). After half an hour, the stimulus is washed away and cells are incubated in normal media for 6–24 h, at which point firefly luciferase activity or GFP fluorescence is measured with a luminometer (Fig. 1b) or by flow cytometry (Fig. 1c), respectively. The lower detection limit of this bioassay using luciferase as readout typically ranges from 0.05 to 0.2 ng per well (2–8 ng/mL, Fig. 1b). Taken together, this bioassay allows the measurement of cGAMP concentration in several samples in only 3 days.

3.2.1 Seeding and Differentiation of THP-1 Reporter Cells (Day 0 of the Bioassay)