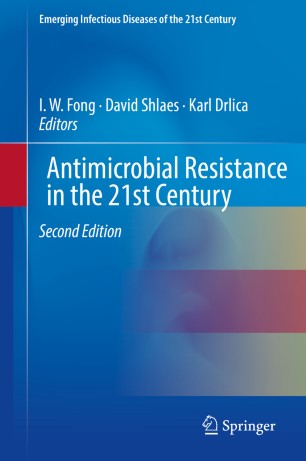 Antimicrobial Resistance in the 21st Century

Antimicrobial resistance is now a general problem. Many of us have elderly relatives who died from a drug-resistant infection, and some of us have suffered from a resistant urinary infection that likely came from intestinal bacteria following antibiotic consumption. Antimicrobial Resistance in the 21st Century provides a broad introduction to the subject in which the situation with problematic pathogens is detailed, the biology of resistance is described, and gaining approval for new antibiotics is discussed. Some topics are immediately practical, such as watching for resistant pathogen sub-populations in cultures taken from patients; other topics point to future research efforts that may lead to new antimicrobials and ways to stimulate the action of existing ones. Overall, Antimicrobial Resistance in the 21st Century provides an update for physicians, serves as a starting point for graduate students interested in solving the resistance problem, and may serve as a text for a course on resistance. Lay readers familiar with microbiology will gain an appreciation for a medical issue that promises to be one of the most important of our time.

Dr. David Shlaes, author of Antibiotics, The Perfect Storm (Springer) and The Drug Makers (Lulu), has had a thirty-year career in anti-infectives spanning academia and industry with a long-standing scientific interest in antimicrobial resistance. He trained in infectious diseases at Case Western Reserve University in Cleveland.  He then joined the faculty and ultimately became a Professor of Medicine there. Dr. Shlaes left academia to become Vice President for Infectious Diseases at Wyeth Pharmaceuticals in 1996, where he was an important leader in the development of tigecycline. In 1998, he was the cover feature in the April issue of Business Week that was dedicated to antibiotics research. He also served as a member of the Forum for Emerging Infections of the National Academy of Sciences for seven years. In 2002, Dr. Shlaes became Executive Vice President, Research and Development, for Idenix Pharmaceuticals, a company located in Cambridge, MA that focused on the discovery and development of antivirals. In 2005, he established a consulting company. During his consulting years, he contributed significantly to the development of avibactam, eravacycline, and lefamulin. During his working career, he lived in Paris, France for several years. Although Dr. Shlaes has retired from Anti-infectives Consulting, he remains an Editor for the journal Antimicrobial Agents and Chemotherapy, writes a blog – Antibiotics - The Perfect Storm – and continues to be active in antibiotic policy making.

Karl Drlica is a molecular biologist (Ph.D. University of California, Berkeley) whose early work focused on DNA gyrase and the control of DNA supercoiling.  His studies contributed to the discovery that bacterial supercoiling is homeostatically regulated by topoisomerases having opposing activities and that environmental conditions (oxygen tension, salt concentrations) can alter global supercoiling levels. Thus, bacterial chromosome structure is sensitive to conditions outside the cell. The finding by his laboratory that transcription can alter supercoiling opened studies on local control of supercoiling. In the 1990s, when immunosuppressed patients in New York City suffered an outbreak of multidrug-resistant tuberculosis, Drlica shifted his focus to the fluoroquinolone inhibitors of bacterial DNA topoisomerases. Studies of fluoroquinolone mechanism and resistance were aimed at combatting the expanding problem of antimicrobial-resistant bacterial infections, in particular tuberculosis. In collaboration with Xilin Zhao, Drlica developed the idea that resistant mutant subpopulations are selectively enriched within a specific range of antimicrobial concentration. This concept revealed a fundamental flaw in our antimicrobial dosing strategies, since with most drug-pathogen combinations the concentrations within patients fall in the mutant-enriching range and thus encourage the emergence of resistance.  Drlica’s work is currently focused on improving the lethal activity of antimicrobials to suppress the enrichment of induced and pre-existing mutant subpopulations. Drlica has also served on NIH Study Sections, on the editorial board of several scientific journals, and as a consultant for patent disputes involving gene cloning and fluoroquinolones. His publications include three books (Understanding DNA and Gene Cloning, Double-Edged Sword, Antibiotic Resistance), and with Dr. Fong he has edited two others. Drlica has carried out his work as a member of the faculty of the University of Rochester and the Public Health Research Institute (now a part of Rutgers University) with visiting scientist positions at the Pasteur Institute (Paris), University of California (Berkeley), and the Indian Institute for Science (Bangalore).

“Each chapter is considered a scientific review article and is well written and well referenced. … This book has been written for both students and clinicians. However, graduate students in microbiology would be a more appropriate audience than professional students.” (Christopher J Destache, Doody's Book Reviews, May 17, 2019)