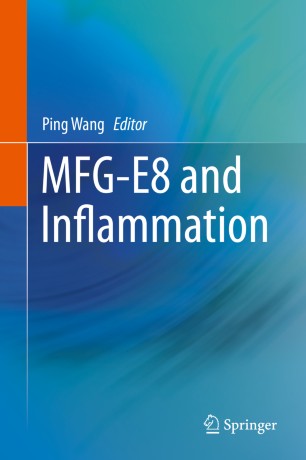 After the discovery of milk fat globule-epidermal growth factor-factor 8 (MFG-E8) about two decades ago, a new era of delineating its potential beneficial role in several inflammatory diseases has begun to spout from the bench to translational research.  In MFG-E8 and Inflammation, the editor and contributors have gathered a remarkable collection covering novel discoveries on the rapidly growing field of MFG-E8 and Inflammation which includes not only the findings from their individual lobotomies, but also from a host of pioneering researchers of this field.

MFG-E8 and Inflammation starts by describing the origin, structure, expression, functions and regulation of MFG-E8, and then on continues thoughtfully exploring its potentiality as a marker for apoptotic, stressed and activated cells.  The topics cover the cellular and physiological function of MFG-E8, especially its role in efficient phagocytosis of apoptotic cells, intestinal barrier function, blood cell homeostasis and coagulation, and in the maintenance of the intact vascular system.  The role of MFG-E8 in macrophages, neutrophils, lymphocytes, dendritic cells, platelets, as well as non-hematopoietic cells is adequately described in the book.  The chapters also contain several lucid discussions on the recent discoveries of the roles of MFG-E8 in the autoimmune diseases, sepsis, tissue ischemia-reperfusion, hemorrhage, inflammatory bowel disease, acute lung injury, asthma, lung fibrosis, stroke, prion disease and Alzheimer’s disease with the potential focus on elucidating novel mechanistic pathways.

MFG-E8 and Inflammation is an indispensable resource for scientists and clinical researchers working on fundamental or applied aspects of MFG-E8 pathobiology.  This book explores, dissects and reviews several noteworthy findings and striking future perspectives which not only rewrite the disease pathophysiology, but also update our understanding towards attaining novel therapeutic potentials against various inflammatory diseases.