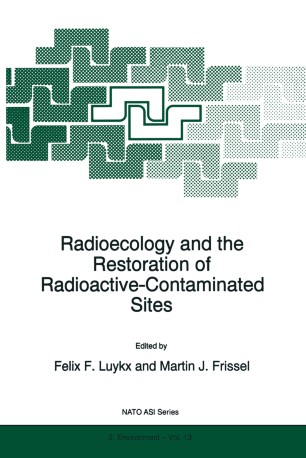 Most of the nuclear facilities built since the Second World War have ceased active operation and have been decommissioned. Some of the sites are heavily contaminated with radioactive substances. Correct and efficient action to mitigate the radiological consequences of such contamination will only be possible when the behaviour of radionuclides in the terrestrial environment is sufficiently well known. Yet radioecologists often find it difficult to study the transfer of radioactivity in agricultural land and semi-natural ecosystems, because of the complexity and diversity of such environments. The present book presents an analysis of all the factors that affect the behaviour of radionuclides as they move from their point of release through the environment and then enter the tissues of biota living in the ecosystems, in particular plants and animals consumed by humans.
The course on which the book is based was held in a region that is heavily contaminated by radioactive discharges into the environment during nuclear weapons fabrication in the 1950s and '60s, and due to a severe accidental release following the explosion of a rad-waste tank in 1957. This allowed in situ training of the students.
The book's main emphasis is on specific radioecological problems in severely contaminated areas in the former Soviet Union: the Southern Urals Trail, the rivers Techa-Isert-Tobol-Irtis-Ob, and the 30 km zone around Chernobyl. Systems examined include soils, arable and pasture land, forests, lakes and rivers. Special attention is paid to the effects of radiation on natural ecosystems: trees, soil-dwelling organisms, and aquatic organisms. Synergistic effects are also considered. Short, medium and long term countermeasures are discussed.