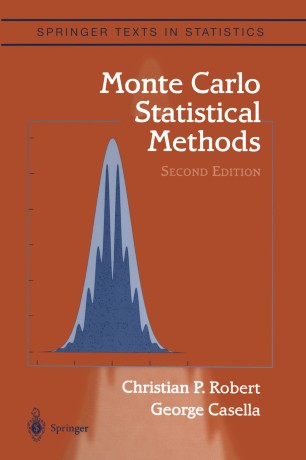 Monte Carlo statistical methods, particularly those based on Markov chains, are now an essential component of the standard set of techniques used by statisticians. This new edition has been revised towards a coherent and flowing coverage of these simulation techniques, with incorporation of the most recent developments in the field. In particular, the introductory coverage of random variable generation has been totally revised, with many concepts being unified through a fundamental theorem of simulation

There are five completely new chapters that cover Monte Carlo control, reversible jump, slice sampling, sequential Monte Carlo, and perfect sampling. There is a more in-depth coverage of Gibbs sampling, which is now contained in three consecutive chapters. The development of Gibbs sampling starts with slice sampling and its connection with the fundamental theorem of simulation, and builds up to two-stage Gibbs sampling and its theoretical properties. A third chapter covers the multi-stage Gibbs sampler and its variety of applications. Lastly, chapters from the previous edition have been revised towards easier access, with the examples getting more detailed coverage.

This textbook is intended for a second year graduate course, but will also be useful to someone who either wants to apply simulation techniques for the resolution of practical problems or wishes to grasp the fundamental principles behind those methods. The authors do not assume familiarity with Monte Carlo techniques (such as random variable generation), with computer programming, or with any Markov chain theory (the necessary concepts are developed in Chapter 6). A solutions manual, which covers approximately 40% of the problems, is available for instructors who require the book for a course.

Christian P. Robert is Professor of Statistics in the Applied Mathematics Department at Université Paris Dauphine, France. He is also Head of the Statistics Laboratory at the Center for Research in Economics and Statistics (CREST) of the National Institute for Statistics and Economic Studies (INSEE) in Paris, and Adjunct Professor at Ecole Polytechnique. He has written three other books and won the 2004 DeGroot Prize for The Bayesian Choice, Second Edition, Springer 2001. He also edited Discretization and MCMC Convergence Assessment, Springer 1998. He has served as associate editor for the Annals of Statistics, Statistical Science and the Journal of the American Statistical Association. He is a fellow of the Institute of Mathematical Statistics, and a winner of the Young Statistician Award of the Société de Statistique de Paris in 1995.

George Casella is Distinguished Professor and Chair, Department of Statistics, University of Florida. He has served as the Theory and Methods Editor of the Journal of the American Statistical Association and Executive Editor of Statistical Science. He has authored three other textbooks: Statistical Inference, Second Edition, 2001, with Roger L. Berger; Theory of Point Estimation, 1998, with Erich Lehmann; and Variance Components, 1992, with Shayle R. Searle and Charles E. McCulloch. He is a fellow of the Institute of Mathematical Statistics and the American Statistical Association, and an elected fellow of the International Statistical Institute.