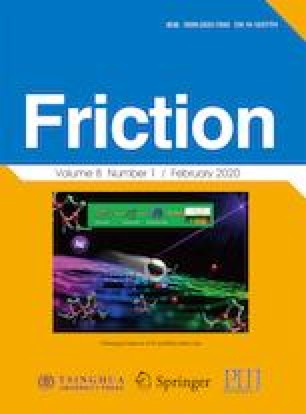 Rate-, state-, and pressure-dependent friction model based on the elastoplastic theory

Adhesion is one of essences with respect to rubber friction because the magnitude of the friction force is closely related to the magnitude of adhesion on a real contact area. However, the real contact area during sliding depends on the state and history of the contact surface. Therefore, the friction force occasionally exhibits rate-, state-, and pressure dependency. In this study, to rationally describe friction and simulate boundary value problems, a rate-, state-, and pressure-dependent friction model based on the elastoplastic theory was formulated. First, the evolution law for the friction coefficient was prescribed. Next, a nonlinear sliding surface (frictional criterion) was adopted, and several other evolution laws for internal state variables were prescribed. Subsequently, the typical response characteristics of the proposed friction model were demonstrated, and its validity was verified by comparing the obtained results with those of experiments conducted considering the contact surface between a rough rubber hemisphere and smooth acrylic plate.

Satoru Maegawa. He received his Ph.D. degree in mechanical engineering from Yokohama National University, Japan, in 2012. His current position is an associate professor at Department of Electrical and Mechanical Engineering, Nagoya Institute of Technology, Japan. His research area covers the tribology of soft materials, the control of friction-induced vibration, and laser-manufacturing technologies.

Open Access: This article is licensed under a Creative Commons Attribution 4.0 International Li-cense, which permits use, sharing, adaptation, distribution and reproduction in any medium or for-mat, as long as you give appropriate credit to the original author(s) and the source, provide a link to the Creative Commons licence, and indicate if changes were made.

The images or other third party material in this article are included in the article’s Creative Commons licence, unless indicated otherwise in a credit line to the material. If material is not in-cluded in the article’s Creative Commons licence and your intended use is not permitted by statutory regulation or exceeds the permitted use, you will need to obtain permission directly from the copyright holder.

To view a copy of this licence, visit https://doi.org/creativecommons.org/licenses/by/4.0/.