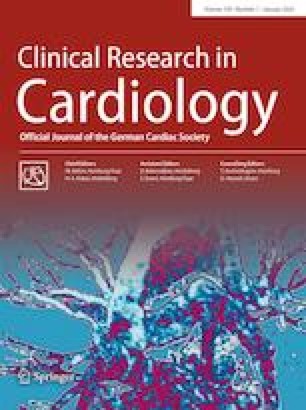 To evaluate the efficacy and safety of edoxaban versus enox–warf in patients who were vitamin K antagonists (VKA) naïve or experienced at time of randomisation into ENSURE-AF trial.

The primary efficacy endpoint was a composite of stroke, systemic embolic event, myocardial infarction, and cardiovascular death during the overall study period, 28 days on study drug after cardioversion and 30 days follow-up. The primary safety endpoint was the composite of major and clinically relevant nonmajor bleeding during the on-medication period from time of first dose to last dose of study drug taken + 3 days.

Stroke prevention with oral anticoagulation (OAC) is one of the cornerstones of atrial fibrillation (AF) management [1]. Moreover, non-vitamin K antagonist oral anticoagulants (NOACs) are increasingly recommended as first line management for stroke prevention in AF [2, 3]. Studies assessing NOACs show that they cause less intracranial haemorrhage and life-threatening bleedings when compared to warfarin, as well as a reduction in mortality [4].

The Edoxaban versus warfarin in subjects undergoing cardioversion of atrial fibrillation (ENSURE-AF) assessed the use of edoxaban vs. enoxaparin–warfarin in patients with non-valvular AF undergoing ECV [9]. This large prospective, randomised, multicenter open-label trial showed a similar efficacy and safety profile of edoxaban vs. enoxaparin–warfarin (enox–warf) in patients with non-valvular AF. Whether this is related to prior vitamin K antagonist (VKA) exposure or not is uncertain.

The aim of this ancillary analysis from the ENSURE-AF trial was to evaluate the efficacy and safety of edoxaban vs. enox–warf in patients who were VKA naïve or experienced at the time of randomisation in the ENSURE-AF study.

The design of the ENSURE-AF trial (NCT 02,072,434) has been previously reported [9, 10]. In brief, this study is a multicentre, prospective, randomised, open-label (patients, statisticians and investigators were not masked to treatment allocation) trial with blinded endpoint assessment. The patients with non-valvular AF (lasting from 48 h to 12 months), eligible for ECV and OAC were enrolled. The patients’ stratification was based on cardioversion approach (TEE or non-TEE), as established by the local investigator or determined by the patient’s previous experience with OAC (i.e. VKA experience vs. naive), edoxaban dose and region. Edoxaban 60 mg once daily (QD; 30 mg QD for creatinine clearance [CrCl] of 15–50 mL/min, weight ≤ 60 kg, and/or concomitant use of P-glycoprotein inhibitor) was compared with enoxaparin–warfarin in 2199 patients (randomisation 1:1; Fig. 1). Subjects with an international normalised ratio (INR) < 2.0 at randomisation were treated with enoxaparin bridging and daily warfarin until the INR was ≥ 2.0, and those with INR ≥ 2.0 at the time of randomisation did not need enoxaparin and were medicated with warfarin alone. The dosing of warfarin was adjusted to achieve and maintain the INR level from 2.0 to 3.0. INR was assessed once every 2–3 days until the value achieved the therapeutic range. Subjects in edoxaban group had to start medication at least 2 h prior ECV. The next dose of edoxaban was taken next day and then on a 24-h cycle until day 28 post cardioversion.

In the TEE-guided group, TEE and ECV had to be done within 3 days of randomisation. In case of presence of thrombi on TEE, patients had a possibility of completing 28 days of study medication without ECV or being discontinued from the study.

In all patients, ECV was done at a minimum of 21 days following the start of medication. In the edoxaban group, patients were treated with edoxaban for a minimum of 21 days before cardioversion followed by the procedure and an additional 28 days of treatment. An algorithm dedicated to the treatment of patients with labile INR was included in the protocol and the 21-day pre-treatment cycle was possible to be restarted under predefined circumstances. The patients who were relocated from a previous OAC to edoxaban did so in accordance with the transition algorithm provided. The patients with spontaneous cardioversion in the preprocedural period (confirmed by a recording of sinus rhythm in electrocardiogram) were required to complete 28 days of treatment from the day that spontaneous cardioversion was recorded and 30 days of follow-up.

The study protocol is concordant with the Declaration of Helsinki and the International Conference on Harmonization consolidated guideline E6 for Good Clinical Practice (CPMP/ICH/135/95). A signed patient informed consent form was acquired before participation in the study.

The primary efficacy endpoint was defined as a composite of stroke, systemic embolic event (SEE), myocardial infarction (MI), and cardiovascular death analysed during the overall study period, 28 days on study drug after cardioversion and then follow-up was performed for safety for another 30 days after completing or discontinuing the medication. The primary safety endpoint was the composite of major and clinically relevant nonmajor bleeding (CRNM) analysed during the on-treatment period from the time of first dose to last dose of study drug taken + 3 days.

The primary efficacy analysis was performed on the intention to treat population (all patients who were enrolled into the trial and randomly assigned). All patients who took at least one dose of study drug (the safety population) were included in primary safety analysis. Sensitivity analyses were calculated in the per-protocol population of all randomly assigned patients without any predefined major protocol deviations. Odds ratios and 95% confidence intervals are shown to evaluate the difference between treatment arms.

Event rates according to prior VKA experience classification and treatment

The ENSURE-AF provides the largest prospective trial dataset for edoxaban in terms of non-valvular AF patients scheduled for cardioversion. In this ancillary analysis from ENSURE-AF, our findings are as follows: (1) edoxaban had non-significantly different rates of primary efficacy and safety endpoint outcomes compared with enoxaparin–warfarin, (2) VKA experienced patients had non-significantly different primary efficacy and safety endpoint outcomes to VKA naïve subjects.

Peri-cardioversion anticoagulation with VKA is associated with lower risk of stroke or thromboembolism than no anticoagulation [11]. Unfortunately, major bleeding events were not evaluated in the above-mentioned systematic review of observational studies.

Planned ECV at study entry was an exclusion criterion in phase 3 randomised trials which compared NOAC to warfarin; however, ECV was performed in those trials during their course [12]. In a retrospective analysis of data from the randomised evaluation of long-term anticoagulation therapy (RE-LY), the proportion of stroke and major bleeding within 30 days of cardioversion on dabigatran (150 mg twice daily and 110 mg twice daily) were low and similar to those on warfarin with or without TEE guidance [12, 13]. In other retrospective analysis [14], there were no differences in the incidence of stroke or systemic embolism and death in patients medicated with rivaroxaban and warfarin. Patients after cardioversion in the apixaban for reduction in stroke and other thromboembolic events in atrial fibrillation (ARISTOTLE) [15] were also evaluated retrospectively. The prevalence of MI, major bleeding and death was similar in patients treated with apixaban and warfarin. In the effective anticoagulation with factor Xa next generation (ENGAGE) AF-TIMI 48 trial [16], stroke or SEE, major bleeding or death were infrequent and similar in patients medicated with edoxaban and warfarin [17]. However, these studies are limited by its post-hoc, nonrandomized design, small cohort and lack of TEE data.

Explore the efficacy and safety of once-daily oral rivaroxaban for the prevention of cardiovascular events in patients with non-valvular atrial fibrillation scheduled for cardioversion (X-VeRT) [18] was a randomised, open-label prospective study of rivaroxaban in patients with AF undergoing elective cardioversion. Rivaroxaban (20 mg QD or 15 mg QD in patients with moderate renal impairment) was associated with low thromboembolic and bleeding risks and broadly similar to risks in patients treated with VKA. Of note, in the group of patients, where cardioversion was performed within the target time range of 21–25 days after randomisation, only 36.3% of patients on warfarin were cardioverted within the target time due to inadequate coagulation.

Another prospective trial, Eliquis evaluated in acute cardioversion compared to usual treatments for anticoagulation in subjccts with atrial fibrillation (EMANATE) [19], showed low rates of stroke, systemic embolic events, death and bleeding events in both the apixaban and heparin/VKA-treated patients. In this study, patients with AF were scheduled for cardioversion during anticoagulation with either apixaban or a conventional heparin/VKA regimen and anticoagulation lasted ≤ 48 h prior to randomisation. The main limitation of the study is the descriptive design, without hypothesis testing, and power calculations.

In our study, the primary efficacy endpoint outcomes were similar in VKA experienced and naïve patients.

Our study has some limitations that should be noted. This trial was underpowered to present statistically significant differences for efficacy or safety endpoints. Moreover, the open-label study design may be associated with bias in reporting outcome. Strengths of the study are the prospective trial design which is the largest dataset comparing a NOAC (edoxaban) to warfarin for efficacy and safety in the peri-cardioversion period. Enox–warf therapy was optimally used with acceptable time in therapeutic range. Management with edoxaban was associated with compliance of more than 99%.

The ENSURE-AF study was sponsored and funded by Daiichi Sankyo.