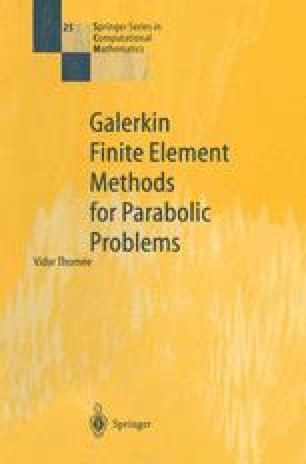 Methods Based on More General Approximations of the Elliptic Problem

In the above discussion of approximation of the parabolic problem the discretization in space was based on a family of finite-dimensional spaces S h ⊂ H 0 1 = H 0 1 (Ω), such that, for some r ≥ 2, the approximation property (1.7) holds. The most natural example of such a family in a plane domain Ω is to take for S h the continuous functions which reduce to polynomials of degree at most r - 1 on the triangles τ of a triangulation Th of Ω of the type described in the beginning of Chapter 1, and which vanish on ∂Ω. However, for r > 2 and in the case of a domain with smooth boundary, it is not possible, in general, to satisfy the homogeneous boundary conditions exactly for this choice. This diffiiculty occurs, of course, already for the elliptic problem, and several methods have been suggested to deal with it. Here we shall only, as an example, consider the following method which was proposed by Nitsche. This will serve as background for our subsequent discussion of the discretization of the parabolic problem. Another example will be considered in Chapter 17 below.