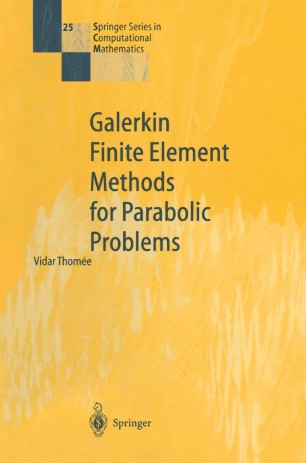 My purpose in this monograph is to present an essentially self-contained account of the mathematical theory of Galerkin finite element methods as applied to parabolic partial differential equations. The emphases and selection of topics reflects my own involvement in the field over the past 25 years, and my ambition has been to stress ideas and methods of analysis rather than to describe the most general and farreaching results possible. Since the formulation and analysis of Galerkin finite element methods for parabolic problems are generally based on ideas and results from the corresponding theory for stationary elliptic problems, such material is often included in the presentation. The basis of this work is my earlier text entitled Galerkin Finite Element Methods for Parabolic Problems, Springer Lecture Notes in Mathematics, No. 1054, from 1984. This has been out of print for several years, and I have felt a need and been encouraged by colleagues and friends to publish an updated version. In doing so I have included most of the contents of the 14 chapters of the earlier work in an updated and revised form, and added four new chapters, on semigroup methods, on multistep schemes, on incomplete iterative solution of the linear algebraic systems at the time levels, and on semilinear equations. The old chapters on fully discrete methods have been reworked by first treating the time discretization of an abstract differential equation in a Hilbert space setting, and the chapter on the discontinuous Galerkin method has been completely rewritten.