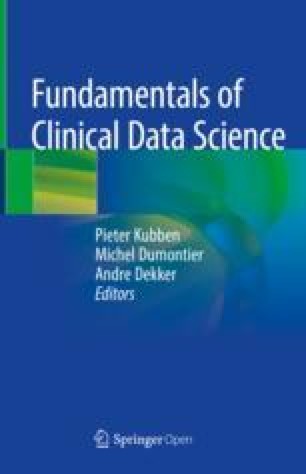 Pre-requisites to better understand the chapter: knowledge of the major steps and procedures of developing a clinical prediction model.

Logical position of the chapter with respect to the previous chapter: in the last chapters, you have learned how to develop and validate a clinical prediction model. You have been learning logistic regression as main algorithm to build the model. However, several different more complex algorithms can be used to build a clinical prediction model. In this chapter, the main machine learning based algorithms will be presented to you.

Learning objectives: you will be presented with the definitions of: machine learning, supervised and unsupervised learning. The major algorithms for the last two categories will be introduced.

In the previous chapters of the book, you have been learning the major techniques to prepare your data, develop and validate a clinical prediction model. The workflow generally consists of selecting some input features and combining them to predict relevant clinical outcomes. The way in which features are combined and relationships between data are discovered are several. In fact, several algorithms used to relate features with expected outcome are available. However, in the previous chapters, the focus has been pointed on one specific algorithm: logistic regression. This chapter proposes you an additional list of algorithms that can be used to train a model.

9.2 What Is Machine Learning?

Machine learning is an application of Artificial Intelligence (AI). AI refers to the ability to program computers (or more in general machines) that are able to solve complicated and usually very time-consuming tasks [1]. An example of a time consuming and complicated task is the extraction of useful information (data mining) from a large amount of unstructured clinical data (‘big data’).

9.3 How Do We Use Machine Learning in Clinical Prediction Modelling?

As you learned in previous chapters, after having prepared your data, you develop a clinical prediction model based on available data. In the model, particular properties of your data (‘features’) will be used to predict your outcome of interest. A particular statistical algorithm is used to learn the ‘features’ that are most representative and relate them to the predicted outcome. In the previous chapter, only the logistic regression algorithm has been presented to you. However, more complex machine learning-based algorithms exist. These algorithms can be divided into two categories: supervised and unsupervised [2].

These algorithms apply when learning from ‘labelled’ data to predict future outcomes [3]. To understand what we mean by labelled data, let us considering the following example. Suppose we are building a model that takes as input some clinical data from the patients (e.g. age, sex, tumor staging) and aims at predicting if a patient will be alive or not (binary outcome) 1 year after receiving the treatment therapy. In our training dataset, the clinical outcome (alive or dead after a certain elapse of time) information is available. These are labelled data. In supervised learning, the analysis starts from a known training dataset and the algorithm is used to infer the predictions. The algorithm compares its output to the ‘labels’ in order to modify it accordingly to match the expected values.

Unsupervised algorithms are used when the training data is not classified or labelled [4]. A common example of unsupervised learning is trying to cluster a population and see if the clusters share common properties (‘features’). This common approach is used in marketing analysis, to see for example if different products might be assigned to different clusters. In summary, the goal for unsupervised learning is to model the underlying structure or distribution in the data in order to learn more about the data. Unsupervised problems can then still be divided into two subgroups:

We refer to semi-supervised algorithms when the number of input data is much greater than the number of output labelled data in the training set [5]. A good example could be a large data set of images, where only few of them are labelled (e.g. dog, cat). Despite this kind of learning problem is not often mentioned, most of the real life machine learning classification problems fall into this category. In fact, labelling data is a very time-consuming task. Imagine in fact a doctor that has to annotate (i.e. delineate anatomical or pathological structures) on hundreds of patients’ scans, which you would like to use as your training dataset.

We will now provide an overview of the main algorithms for each presented category.

SVMs can used for both classification and regression, despite being mostly used in classification problems [6]. The SVM are based on an n-dimensional space where n is the number of features you would like to use as an input. Imagine plotting all your data in the hyperspace, where each point correspond to the n-dimensional feature vector of your input data. Therefore, for example, if you have 100 input data and 10 features, 100 vectors of dimension 10 will constitute the hyperspace.

The SVM will try to find the hyperplane / hyperplanes that separate your data into two (or more) classes.

The definition of margin will help us. In SVMs the margin is defined as the distance between the nearest data point or class (called the “support vector”) and hyper-plane. With this definition in mind, it becomes clear that the best solution in Fig. 9.1b is line C. However, we only have considered problems where the classes were easily separable by linear hyperplanes. What happens if the problem is more complicated like shown in Fig. 9.1c? It is clear that we cannot have a linear hyperplane to separate the classes, but visually it seems that a hyper-circle might work. This relates to the concept of kernel. A SVMs kernel function gives the possibility to transform non-linear spaces (Fig. 9.1c) into linear spaces (Figs. 9.1a and b). Most common available SVMs computational packages [7] [8] offer different kernels from the most famous radial basis function-based kernel to higher order polynomials or sigmoid functions.

What are the most important parameters in a SVM?

What are the most important parameters in a RF?

Finding an agreed definition of ANNs is not that easy. In fact, most of the literature studies only provided graphical representations of ANN. The most used definition is the one by Haykin [10], who defines an ANN architecture as a massively parallelized combination of very simple learning units that acquire knowledge during the training and store the knowledge by updating their connections to the other simple units.

Often, ANNs have been compared to biological neural networks. Again, activities of biological neurons can then compared to ‘activities’ in processing elements in ANNs. The process of training an ANN becomes then very similar on the process of learning in our brain: some inputs are applied to neurons, which change their weights during the training to produce the most optimized output.

One of the most important concepts in ANNs is their architecture. With the word architecture we mean how the ANN is structured, meaning how many neurons are present and how they are connected.

A typical architecture of ANNs is shown in Fig. 9.3: the input layer is characterized by input neurons, in our case the number of features we would like to input for our model. The output layer corresponds to the desired output of our model. In case of binary classification problems, for example, the output layer will only have two output neurons, but in case of multiple classifications, the number of output neurons can increase up to number of classes. In between, there is a ‘hidden layer’, where the number of hidden neurons can vary from few to thousands. Sometimes, in more complicated architectures, there might be several hidden layers.
ANNs are also classified according to the flow of the information:

There is a ‘hidden layer’, where the number of hidden neurons can vary from few to thousands. Sometimes, in more complicated architectures, there might be several hidden layers.

‘Deep learning’ or ‘Convolutional Neural Networks’ (CNN) represents an example of very complicated ANNs [11]. The major feature of CNNs is that they can automatically learn significant features. In fact, each layer, during the training procedure, learns which the most representative features are. However, this might lead to use ‘deep learning’ as a ‘black-box’. It is out of the topic of this chapter to dive into properties of CNNs. However, for the interested readers we suggest following references [12, 13].

What are the most important parameters in an ANN?

The goal of this algorithm is to find groups (or clusters) in data. The number of chosen group is defined by the variable K. The basic idea of the algorithm is to iteratively assign the data point to one of the K groups based on the features used as input [18]. The groups are assigned by similarities in the features values. The outputs of the algorithm are the centroids of each cluster K, and the labels for training data (each data point).

What are the most important parameters in k-means?

Compared to k-means, hierarchical clustering starts by assigning all data points as their own cluster. The basic idea of the algorithm is to build hierarchies and then assign points to clusters [21]. The workflow can be summarized as:

What are the most important parameters in hierarchical clustering?