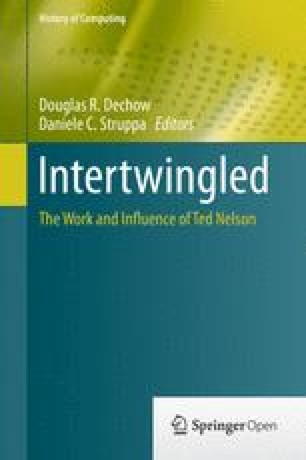 Selected List Item Dream Machine Group Hypertext Hypertext Work Oxford Internet Institute
These keywords were added by machine and not by the authors. This process is experimental and the keywords may be updated as the learning algorithm improves.
Download chapter PDF

My earliest description of Ted Nelson was on the 1988 ACM disk Hypertext on Hypertext, which was the first electronic journal, incorporating the articles from the July 1988 issue of Communications of the ACM. These articles were derived from the 1987 Hypertext conference. We created the articles as hypertext documents using our HyperTies system (www.cs.umd.edu/hcil/hyperties). The tilde marks (~) surround phrases that were highlighted selectable links that could be clicked on to jump to the related article.

Our research and development were inspired by Vannevar Bush’s 1945 description of Memex, in which links were numeric codes that had to be typed in and by Ted Nelson’s work with Andries Van Dam. Only later did we see Doug Engelbart’s 1968 demo video, which had selectable list items. So while there were several precedents, I take credit for the highlighted textual link embedded in sentences. I invented the highlighted textual link in 1984, while working with grad student Dan Ostroff, as part of our development of an electronic encyclopedia for the emerging U.S. Holocaust Memorial Museum. We ran empirical studies of different highlighting schemes and tested user capacity to navigate as well as ability to comprehend the paragraphs of text. We called the highlighted textual links, “embedded menus,” but Tim Berners-Lee referred to them with the more compelling term “hot spots” in citing our work in his spring 1989 manifesto for the web.

A pioneering visionary of universal hypertext systems including the social and legal structures; keynote speaker at Hypertext ’87 Workshop.

Nelson worked with the hypertext group at Brown University and collaborated with Andries Van Dam in the 1970s. Ted Nelson was one of the three keynote speakers at the Hypertext 87 Workshop. Recently AutoCAD, Inc. initiated a collaboration with Nelson and his Xanadu project.

A year later I wrote about Ted Nelson for the world’s first electronic book [2], as determined by our Library of Congress colleagues asking for guidance about how to catalog it.

In his book “Dream Machines,” Nelson developed his ideas about augmentation with an emphasis on creating a global, unified literary environment. This environment looked beyond simple hierarchical relations to a densely interwoven network of nodes which would reflect the ideas within the human mind. His hypertext system, Xanadu, was in fact to be a network of interconnected hypertext engines used as an environment for both cooperative thinking and the electronic publication of hypertext works.

My photos of Ted Nelson (Figs. 2.2 and 2.3) show him to be cheerful and ready for creativity.