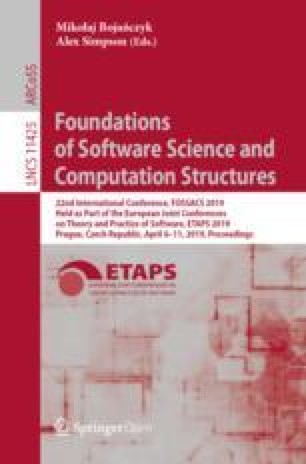 International Conference on Foundations of Software Science and Computation Structures

In this paper, we first show that this construction does not work in intensional type theory without assuming Uniqueness of Identity Proofs (UIP), which is incompatible with the Univalence axiom of Homotopy Type Theory [18]. We then give an alternate construction in cubical type theory [6], which is compatible with Univalence. Specifically, this paper makes the following contributions:1

We mostly mimic Agda syntax. The double bar symbol \(=\) is used for definitions directly and by pattern matching, and for equality of terms up to conversion. We write \((a : A) \rightarrow B\) for the dependent product type, and \(A \rightarrow B\) for the non-dependent version. Functions are given by pattern matching \(f\; x = y\) or by lambda expressions \(f = \lambda x.y\). Similarly \((a : A) \times B\) is the dependent pair type, and \(A \times B\) the non-dependent version. Pairs are (a, b), and projections are p.1 and p.2. The unit type is \(\top \), with unique inhabitant \(\star \). Identity types are \({x}\equiv _{X}{y}\) for the type of identifications of x with y in type X, and we write \(\texttt {refl}\) for a proof of reflexivity. We do not assume that axiom K holds for identity types. We write Type for a universe of types (where Agda uses \(\text {Set}\)). In Sect. 3 we work in cubical type theory, which will be explained there.

1.2 Running Example of an Inductive-Inductive Definition

For the purposes of this paper, we will focus on one relatively simple inductive-inductive definition (with only 5 clauses), parametrized by a type X, which is given in Fig. 1. We will use this definition to prove that Nordvall Forsberg’s construction implies UIP in Sect. 2 and as a running example to demonstrate our construction in cubical type theory in Sect. 3.

Our goal in this paper is to construct \((A,B,\eta ,\texttt {ext},\texttt {inj})\) of the types given in Fig. 1 such that the simple elimination rules hold without using UIP. But first, we will show why Nordvall Forsberg’s approach is not sufficient.

Nordvall Forsberg’s construction of inductive-inductive types is described in [15, §5.3]. In this section, we show that if the simple elimination rules hold for this construction of the inductive-inductive type in Fig. 1, then UIP holds for the type X (Theorem 1). This argument has been formalized in both Coq version 8.8.0 [8] (see UIP_from_Forsberg_II.v) and Agda using the –without-K flag (see UIP_from_Forsberg_II.agda).

In the next two subsections, we prove that:

Combining these results, we conclude that Nordvall Forsberg’s construction satisfies the simple elimination rules in intensional type theory only if UIP holds (Theorem 1).

2.3 Simple Elimination Rules for Nordvall Forsberg’s Construction only if UIP

If the simple elimination rules hold for Nordvall Forsberg’s construction, then UIP holds for the type X.

Compose the results of Lemmas 2 and 5.

Therefore Nordvall Forsberg’s approach to constructing inductive-inductive types requires UIP. Since UIP is inconsistent with the Univalence axiom at the center of Homotopy Type Theory (HoTT) [18], we have an incentive to come up with a different construction which is consistent with HoTT.

Cubical type theory [6] is a recently developed type theory which gives a constructive interpretation of the Univalence axiom of Homotopy Type Theory. It has an implementation as a mode for Agda [19], which we use to formalize the construction given in this section of the running example from Fig. 1.

In this section, we construct the running example from Fig. 1, along with the simple elimination rules, in cubical type theory. Our construction proceeds in several steps:

Given the nice goodness algebra in Sect. 3.5 we can then construct the simple elimination rules by Sect. 3.3. This construction has been formalized in Agda2 using the –cubical flag which implies –without-K (see RunningExample.agda).

The intuition for our construction is that the Nordvall Forsberg’s approach of pairing an approximation with goodness predicates can be repeated, and each time the approximation gets better. Using HoTT terminology, we showed in Sect. 2 that one iteration suffices only if X has homotopy level 0 (is a homotopy set, satisfies UIP). In general, \(n+1\) iterations are sufficient if only if X has homotopy level n. The successor goodness algebra defined in Sect. 3.4 is a slightly simplified version of Nordvall Forsberg’s construction, and taking the limit (in Sect. 3.5) gives a construction which works for arbitrary homotopy levels.

We will use definitions by induction and by pattern-matching on the pre-syntax in sections Sects. 3.3 and 3.4 respectively.

In this section, we identify a property niceness that is sufficient for a goodness algebra to produce an inductive-inductive object \((A, B, \eta , \texttt {ext}, \texttt {inj})\) which satisfies the simple elimination rules, as given in Fig. 1.

We are trying to create a nice goodness algebra by taking the limit of successive approximations, so we need a step function, which we will call S, that takes a goodness algebra \(\delta ^G\) and returns a new goodness algebra \(S\;\delta ^G\), which is closer in some sense to being nice. We do so by pattern matching on the pre-syntax to unroll one level of the recurrence equations niceness encodes.

This construction commutes with most type formers: dependent function types, dependent pair types, identity types, and constants. We also note a dependent version of the fact that the limit of a chain is equivalent to the limit of a shifted chain to substitute for Ahrens et al. [1, Lemma 12].

Limit of Goodness Algebras. Now we use the lemmas about chains to construct a nice goodness algebra, and then conclude by constructing an inductive-inductive object \((A,B,\eta ,\texttt {ext},\texttt {inj})\) that satisfies the simple elimination rules.

The sorts of the limit goodness algebra are defined as a chain, and operations act pointwise on each component of the chain. To prove that the operations are equivalences, we compose a proof that \(\text {Arg}\) commutes with chains (given by combining the lemmas about chains commuting with type formers) with a proof that for each sort, the chain given by the \((E\;(S^n\;\mathbb {O}))\) is equivalent to the chain given by \((S^n\;\mathbb {O})\) (given by Lemma 7). Since \((E\;(S^n\;\mathbb {O}))\) is defined by pattern matching to reduce to \(\text {Arg}\), the right and left sides of these equivalences agree, and we find that the operations are indeed nice. See the formalization for details.

There exists an inductive-inductive object \((A, B, \eta , \texttt {ext}, \texttt {inj})\) that satisfies the simple elimination rules as defined in Fig. 1.

A nice goodness algebra exists by Lemma 8, therefore we can construct \((A, B, \eta , \texttt {ext}, \texttt {inj})\) satisfying the simple elimination rules by Lemma 6.

We have therefore succeeded. In cubical type theory, the inductive-inductive definition from Fig. 1 is constructible.

In his thesis and previous papers [15, 16, 17], Nordvall Forsberg studies the general theory of inductive-inductive types, axiomatizing a limited class of such definitions, and giving a set theoretic model showing that they are consistent. He also considers various extensions such as allowing a third type indexed by the first two, allowing the second type to be indexed by two elements of the first, or combining inductive-inductive definitions with inductive-recursive definitions from Dybjer and Setzer [10].

In this paper, we have:

We claim that the construction of our specific running example is straightforwardly generalizable to other inductive-inductive types, and have formalized the construction of a number of other examples including types with non-finitary constructors and indices to support this claim (see the GitHub repository referenced in the introduction).

I would like to thank Talia Ringer and Dan Grossman from the UW PLSE lab, for their invaluable feedback throughout the revision process. I also thank Pavel Panchekha, John Leo, Remy Wang, and Fredrik Nordvall Forsberg for their comments.

Some of this work was completed while studying at Tokyo Institute of Technology under Professor Ryo Kashima. I would like to thank Professor Kashima, as well as my fellow lab members and mentors Asami and Maniwa for making my stay both productive and enjoyable.