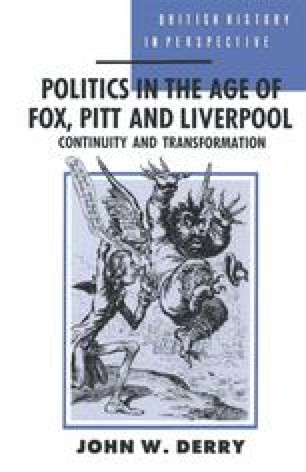 Politics in the Age of Fox, Pitt and Liverpool pp 1-4 | Cite as

For half a century British politics were dominated by two men, the Younger Pitt and Lord Liverpool, whose assumptions were derived from the conventional wisdom of the eighteenth century but whose political skills ensured, not only that the country’s traditional institutions survived a period of war and domestic change, but that the nation underwent transformation without experiencing revolution or sustained social conflict. Pitt established a particular mode of political behaviour, Liverpool reactivated it. Both looked back to the Glorious Revolution and the Revolution Settlement, with all that they implied in terms of the balanced constitution, but this did not mean that the political system stood still, or that they failed to recognise the need for adjustment. The defence of familiar institutions led to innovations in practice. Although Catholic emancipation and the reform of parliament marked the end of an era the Old Order in England ended on a note of achievement. The system established by Pitt and refined by Liverpool showed considerable resilience and a capacity for absorbing new challenges which has often been underestimated.