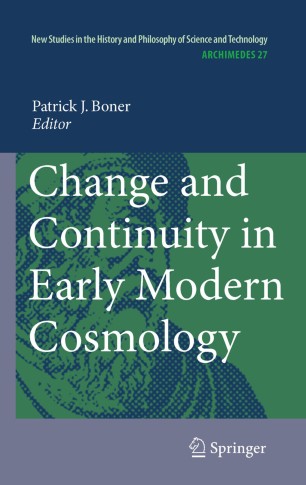 Viewed as a flashpoint of the Scientific Revolution, early modern astronomy witnessed a virtual explosion of ideas about the nature and structure of the world. This study explores these theories in a variety of intellectual settings, challenging our view of modern science as a straightforward successor to Aristotelian natural philosophy. It shows how astronomers dealt with celestial novelties by deploying old ideas in new ways and identifying more subtle notions of cosmic rationality. Beginning with the celestial spheres of Peurbach and ending with the evolutionary implications of the new star Mira Ceti, it surveys a pivotal phase in our understanding of the universe as a place of constant change that confirmed deeper patterns of cosmic order and stability.

“This collection of essays, originally written for a conference held at Johns Hopkins in 2009 … . ‘New stars’ have long captured the attention of historians, but to my knowledge this is the first set of studies to focus on how early modern astronomers dealt with new stars from 1572 to the late seventeenth century. … A particular strength of this volume is its expansion beyond Kepler and Galileo to the larger communities engaged in astronomical and mathematical pursuits.” (Richard Oosterhoff, British Journal for the History of Science, Vol. 45 (3), September, 2012)