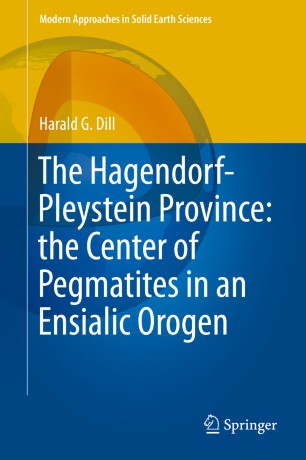 The Hagendorf-Pleystein Province: the Center of Pegmatites in an Ensialic Orogen

This book will broaden readers’ understanding of pegmatites in a special geodynamic setting, dealing with the emplacement of the Hagendorf-Pleystein Pegmatite Province (HPPP) in the Central European Variscides. This treatise illustrates the complex processes leading to the formation and partial destruction of the pegmatites, documenting the geochronological, chemical, mineralogical, geological and geomorphological / sedimentological data set. The book starts with a detailed account of the economic geology of the various pegmatites, concluding with a model of the pegmatite evolution in an ensialic orogen.

The Late Paleozoic rare-element pegmatites of the HPPP, Oberpfalz-SE, Germany, rank among the largest in Europe. The biggest pegmatite of this mining district totals 4.4 million tons of ore (Hagendorf-South). The mining history of the HPPP is restricted to the 20th century, when local entrepreneurs started mining operations in search of ceramic raw materials, feldspar and quartz. Today the “Silbergrube Aplite” is still worked for feldspar. The traditional mining of pegmatitic and aplitic rocks in Central Europe, such as the Bohemian Massif, which is shared by Germany, the Czech Republic, Poland and Austria, has been focused on these industrial minerals. In addition to these commodities, lithium was mined for a period of time. But even today many of these pegmatites of calc-alkaline affiliation have not lost their appeal to mineralogists and mineral enthusiasts for their wealth of minerals that contain P, Nb, Ta, Li, Be, B, U, Th, Sc, Ti and Sn. The most favorable crustal section to bring about pegmatitic rocks of this type, encompassing pegmatoids, metapegmatites, reactivated pseudopegmatites and pegmatites sensu stricto

is the ensialic orogen, exemplified by the Variscan (Hercynian) Orogen, which geodynamically connects the Paleozoic pegmatite provinces in North America and Europe. The geological history of the HPPP, however, goes much further than the Carboniferous-Permian magmatic activity, when the last structural disturbances of the Variscan orogeny affected the NE-Bavarian Basement between 450 and 330 Ma. During this time mafic magmatic rocks together with sedimentary rocks were converted to paragneisses, calcsilicates and amphibolites. During the Late Permian, the Mesozoic and the Cenozoic, the HPPP did not lie idle in geological terms; hypogene and supergene alteration continued and found its most recent expression in alluvial-fluvial “nigrine” placer deposits, which resulted from the unroofing of the pegmatites and aplites in the HPPP and can be used as a general ore guide to pegmatites.