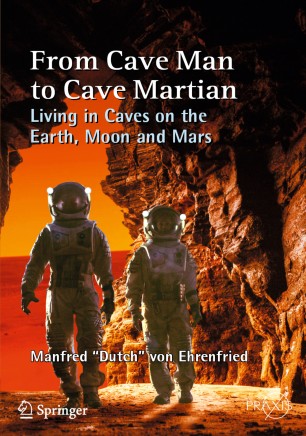 From Cave Man to Cave Martian

Living in Caves on the Earth, Moon and Mars

This book explores the practicality of using the existing subsurface geology on the Moon and Mars for protection against radiation, thermal extremes, micrometeorites and dust storms rather than building surface habitats at great expense at least for those first few missions. It encourages NASA to plan a precursor mission using this concept and employ a “Short Stay” Opposition Class mission to Mars as the first mission rather than the “Long Stay” concept requiring a mission that is too long, too dangerous and too costly for man’s first missions to Mars.
Included in these pages is a short history on the uses of caves by early humans over great periods of time. It then describes the ongoing efforts to research caves, pits, tunnels, lava tubes, skylights and the associated technologies that pertain to potential lunar and Mars exploration and habitation. It describes evidence for existing caves and lava tubes on both the Moon and Mars. The work of noted scientists, technologists and roboticists are referenced and described. This ongoing work is more
extensive than one would think and is directly applicable to longer term habitation and exploration of the Moon and Mars. Emphasis is also given to the operational aspects of working and living in lunar and Martian caves and lava tubes.