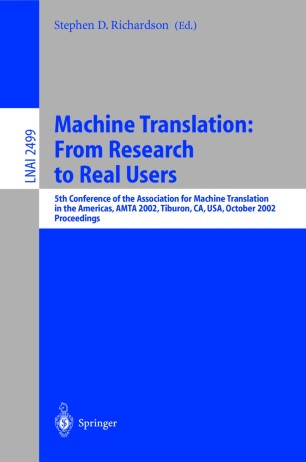 AMTA: Conference of the Association for Machine Translation in the Americas

AMTA 2002: From Research to Real Users Ever since the showdown between Empiricists and Rationalists a decade ago at TMI 92, MT researchers have hotly pursued promising paradigms for MT, including da- driven approaches (e.g., statistical, example-based) and hybrids that integrate these with more traditional rule-based components. During the same period, commercial MT systems with standard transfer archit- tures have evolved along a parallel and almost unrelated track, increasing their cov- age (primarily through manual update of their lexicons, we assume) and achieving much broader acceptance and usage, principally through the medium of the Internet. Webpage translators have become commonplace; a number of online translation s- vices have appeared, including in their offerings both raw and postedited MT; and large corporations have been turning increasingly to MT to address the exigencies of global communication. Still, the output of the transfer-based systems employed in this expansion represents but a small drop in the ever-growing translation marketplace bucket.