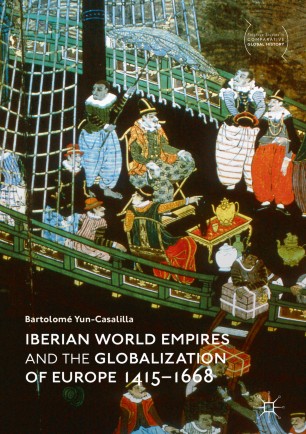 Iberian World Empires and the Globalization of Europe 1415–1668

This open access book analyses Iberian expansion by using knowledge accumulated in recent years to test some of the most important theories regarding Europe’s economic development. Adopting a comparative perspective, it considers the impact of early globalization on Iberian and Western European institutions, social development and political economies. In spite of globalization’s minor importance from the commercial perspective before 1750, this book finds its impact decisive for institutional development, political economies, and processes of state-building in Iberia and Europe.  The book engages current historiographies and revindicates the need to take the concept of composite monarchies as a point of departure in order to understand the period’s economic and social developments, analysing the institutions and societies resulting from contact with Iberian peoples in America and Asia.  The outcome is a study that nuances and contests an excessively-negative yet prevalent image of the Iberian societies, explores the difficult relationship between empires and globalization and opens paths for comparisons to other imperial formations.