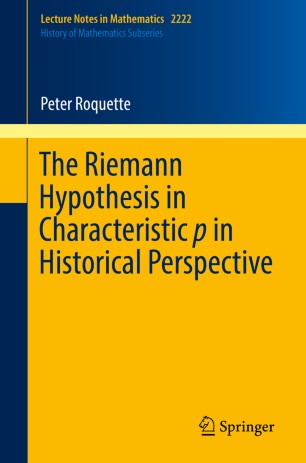 The Riemann Hypothesis in Characteristic p in Historical Perspective

This book tells the story of the Riemann hypothesis for function fields (or curves) starting with Artin's 1921 thesis, covering Hasse's work in the 1930s on elliptic fields and more, and concluding with Weil's final proof in 1948. The main sources are letters which were exchanged among the protagonists during that time, found in various archives, mostly the University Library in Göttingen. The aim is to show how the ideas formed, and how the proper notions and proofs were found, providing a particularly well-documented illustration of how mathematics develops in general. The book is written for mathematicians, but it does not require any special knowledge of particular mathematical fields.