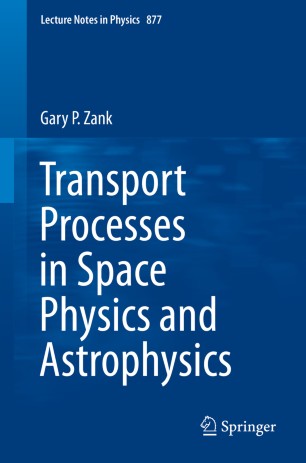 Transport Processes in Space Physics and Astrophysics is aimed at graduate level students to provide the necessary mathematical and physics background to understand the transport of gases, charged particle gases, energetic charged particles, turbulence, and radiation in  an astrophysical and space physics context. Subjects emphasized in the work include collisional and collisionless processes in gases (neutral or plasma), analogous processes in turbulence fields and radiation fields, and allows for a simplified treatment of the statistical description of the system. A systematic study that addresses the common tools at a graduate level allows students to progress to a point where they can begin their research in a variety of fields within space physics and astrophysics. This book is for graduate students who expect to complete their research in an area of plasma space physics or plasma astrophysics. By providing a broad synthesis in several areas of transport theory and modeling, the work also benefits researchers in related fields by providing an overview that currently does not exist.

For numerous interesting and challenging space physics and astrophysics problems, there is a need to describe the “long-term” behavior of systems governed by macroscopic laws and microscopic randomness. A random event has an outcome that is uncertain and unpredictable, yet the collective behavior of a system can be governed by well defined mathematical and physical principles. Examples of physical problems include the behavior of gases in the presence of microscopic inter-particle collisions, the evolution of a gas of charged protons and electrons (a plasma), the collective propagation of solar energetic particles or cosmic rays in a magnetically turbulent medium, the collective behavior of dust in an accretion disk subject to coagulation and destruction, the evolution of low-frequency magnetic field turbulence in the inhomogeneous solar wind, or the transport of photos in a partially ionized interstellar medium. This book provides graduate students with a unified introduction to the physics of collective phenomena or transport processes for gases (charged and uncharged), fields, and photons in a space physics or astrophysics context.