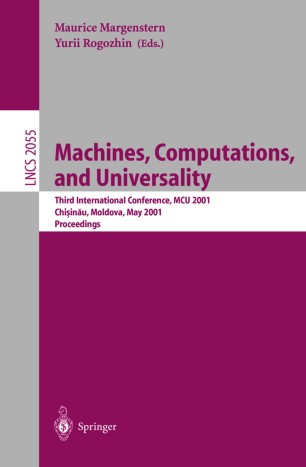 In the ?rst part of the present volume of LNCS, the reader will ?nd the invited talks given at the MCU 2001 conference. In the second part, he/she will ?nd the contributions that were presented at the conference after selection. In both cases, papers are arranged in the alphabetical order of the authors. MCU 2001 is the third conference in theoretical computer science, Machines, computations and universality, formerly, Machines et calculs universels. Both previous conferences, MCU’95 and MCU’98, were organized by Maurice M- genstern in Paris and in Metz (France), respectively. From the very beginning, MCU conferences have been an international sci- ti?c event. For the third conference, in order to stress that aspect, it was decided to hold it outside France. Moldova was chosen thanks to the close cooperation between the present chairmen of MCU 2001. MCU 2001 also aims at high scienti?c standards. We hope that the present volume will convince the reader that the tradition of previous conferences have been upheld by this one. Cellular automata and molecular computing are well represented in this volume. And this is also the case for quantum computing, f- mal languages, and the theory of automata. MCU 2001 does not fail its tradition of providing our community with important results on Turing machines.