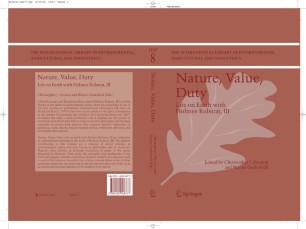 Part of the The International Library of Environmental, Agricultural and Food Ethics book series (LEAF, volume 8)

"Gifford Lecturer and Templeton Prize winner Holmes Rolston, III is widely known as the father of environmental ethics. From his authorship of one of the first articles in professional environmental philosophy ("Is there an Ecological Ethic?" 1975) to his most recent article on the place of humanity in the cosmos ("Generating Life on Earth: Five Looming Questions" 2007) no author has taken a more prominent role in mapping out the terrain in environmental philosophy. His writings range between natural philosophy and theology and include detailed presentations of an interlocking position that includes aesthetics, value theory, natural resource policy, wilderness advocacy, and sustainable development."

"Nature Value and Duty: Life on Earth with Holmes Rolston, III" is a collection of contemporary writings on the work of Holmes Rolston, III. The authors contributing to this volume are a mixture of senior scholars in environmental ethics and new voices in philosophy and in literature. Together they provide an in depth evaluation of many of the topics discussed by Rolston. They probe the strengths and weaknesses of his work and suggest valuable correctives. Rolston himself, in a detailed reply to each of his critics at the end of the volume, reveals where some of these criticisms sting him the most and in the process provides one of the most detailed and articulate defenses of his position ever offered."