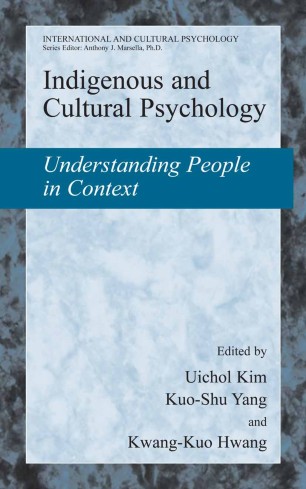 It was once assumed that the bedrock concepts of psychology held true for all the world’s peoples. More recently, post-modern approaches to research have expanded on these Western models, building a psychology that takes into account the sociopolitical, historical, religious, ecological, and other indigenous factors that make every culture, as well as every person as agents of their own actions.

Indigenous and Cultural Psychology surveys psychological and behavioral phenomena in native context in various developing and developed countries, with particular focus on Asia. An international team of 28 experts clarifies culture-specific concepts (such as paternalism and the Japanese concept of amae), models integrative methods of study, and dispels typical misconceptions about the field and its goals. The results reflect culturally sound frames of reference while remaining rigorous, systematic, and verifiable. These approaches provide a basis for the discovery of true psychological universals.

Among the topics featured:

With this book, the editors have captured a growing field at a crucial stage in its evolution. Indigenous and Cultural Psychology benefits students and researchers on two levels, offering groundbreaking findings on understudied concepts, and signaling future directions in universal knowledge.