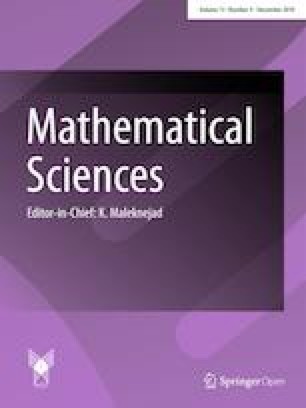 A fourth-order B-spline collocation method has been applied for numerical study of Burgers–Fisher equation, which illustrates many situations occurring in various fields of science and engineering including nonlinear optics, gas dynamics, chemical physics, heat conduction, and so on. The present method is successfully applied to solve the Burgers–Fisher equation taking into consideration various parametric values. The scheme is found to be convergent. Crank–Nicolson scheme has been employed for the discretization. Quasi-linearization technique has been employed to deal with the nonlinearity of equations. The stability of the method has been discussed using Fourier series analysis (von Neumann method), and it has been observed that the method is unconditionally stable. In order to demonstrate the effectiveness of the scheme, numerical experiments have been performed on various examples. The solutions obtained are compared with results available in the literature, which shows that the proposed scheme is satisfactorily accurate and suitable for solving such problems with minimal computational efforts.

In the proposed work, the fourth-order cubic B-spline collocation method is adopted to solve Burgers–Fisher equation. Fourth-order approximation for both single and double derivatives is employed. It has been done by using different end conditions and taking one more term in the Taylor series expansion, thus resulting in very accurate and efficient numerical solutions. Moreover, the present method does not require any involvement of integrals to get the final set of equations, thus reducing the computational efforts to a great extent.

The aim of this work is to investigate the numerical solutions of the Burgers–Fisher equation for different parametric values using collocation method with cubic B-splines as basis functions.

To the best of our knowledge, nobody has yet dealt with the Burgers–Fisher equation with the scheme considered in this work. The present scheme gives the approximate solution at any point of the solution domain. Our work is compared with the previous literature, and results are found to be better in terms of accuracy and efficiency. The proposed method is quite simple and produces highly accurate results for considerably lesser grid size, hence reducing complexity and computational cost.

The organization of this paper is as follows. “Mathematical formulation” section gives a description of the cubic B-spline collocation method. In “Implementation of the method” section, the method is applied to the Burgers–Fisher equation with the treatment of boundary conditions. In “Stability of the scheme” section, stability analysis of the method is carried out. “Numerical experiments and discussions” section presents some test examples of the Burgers–Fisher equation. A summary is given at the end of the paper in “Conclusion” section.

The approximate values K(x, t) and their first-order derivatives at the knots are defined using Taylor expansions and finite difference as follows:

Implementation of the method

Stability of the scheme

The authors thank the anonymous referees for their useful and timely suggestions. The corresponding author would like to thank Prof R.C. Mittal for being a great mentor and guiding towards the right path. His support, patience and time is truly acknowledged.