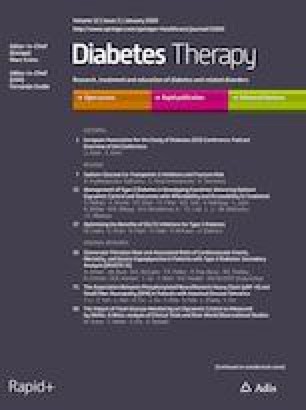 Kawaguchi et al. have produced two publications of data from a small-scale cross-over study comparing insulin glargine 300 units/mL (glargine U300) with insulin degludec (degludec) in 30 patients with type 2 diabetes [1, 2]. This cross-over study was approved by the ethics committee of Minami Osaka Hospital and executed in accordance with the Declaration of Helsinki, with all patients providing informed consent. In the first of the two publications, the glargine U300 treatment period was associated with an overall lower percentage of time in a predefined hypoglycaemic range of < 70 mg/dL (1.3% ± 2.7% [glargine U300] vs. 5.5% ± 6.4% [degludec]; p = 0.002) assessed by continuous glucose monitoring (CGM) over a 3-day period, with the authors concluding that glargine U300 carries a lower risk of hypoglycaemia [1]. It should be noted that recently published recommendations suggest longer CGM data collection periods for individuals with variable glycaemic control—for example, 4 weeks of data to investigate hypoglycaemia exposure [3]. In a secondary analysis, the authors hypothesised that this apparent risk difference might derive from differences in the pharmacokinetic properties of the two basal insulins [2]. As degludec forms a circulating depot by reversibly binding to albumin after absorption from the subcutaneous depot, they hypothesised that patients with low albumin concentrations might be subject to greater exposure to unbound degludec. The authors therefore assessed the relationship between time in hypoglycaemia and albumin concentration and found that the risk difference between the insulins was confined to the 15 patients with serum albumin levels of < 3.8 g/dL when the cohort was stratified above or below this concentration [2].

If the findings of Kawaguchi et al. [1, 2] are genuine, they raise important considerations about the use of degludec with regard to patients’ serum albumin level. We contend, however, that these findings are likely to be anomalous and actually reflect methodological flaws in the original cross-over study that relate to the well-documented lower unit potency of glargine U300 [4, 5, 6]. We therefore offer commentary on this methodology and present some relevant and previously unpublished data from the DEVOTE cardiovascular outcomes trial that concern albumin concentration and hypoglycaemia risk.

Firstly, we would like to stress that in any comparative study of two insulins in which hypoglycaemia is evaluated as an outcome, it is essential to achieve parity in another parameter of glucose control. Conventionally, this would be glycated haemoglobin (HbA1c), a marker of overall glucose exposure and the standard reference point when comparing other outcomes in diabetes. A disadvantage of HbA1c, however, is that it is retrospective (reflecting glucose exposure over a period of a few weeks) and slow to change in response to interventions; hence, most diabetes trials using this endpoint tend to be run for a minimum of 26 weeks. Presumably, this is why HbA1c was not evaluated in the Kawaguchi et al. cross-over study. The duration of the treatment periods in this study is not clearly explained, but the authors state that the first treatment period ran for a period of > 10 days for titration (every 3–4 days) followed by 5 days of CGM; this duration is clearly insufficient for meaningful HbA1c assessment.

Importantly, for the first period of the cross-over study, both insulin-naïve patients started on the same unit dose for each insulin (glargine U300 or degludec) and previously insulin-treated patients were switched unit-for-unit to the study insulins. For the second treatment period, the basal insulin was also switched (from glargine U300 to degludec, or vice versa) unit for unit (after a 3–4-day wash-out period) and then left unchanged. This approach presupposes parity in the glucose-lowering potency of the two insulins, but the potency of glargine U300 is known to be reduced compared with insulin glargine 100 units/mL (glargine U100) and degludec. Indeed, the prescribing information for glargine U300 (TOUJEO®; Sanofi S.A., Paris, France) states [4]:

“For patients controlled on LANTUS (insulin glargine, 100 units/mL) expect that a higher daily dose of TOUJEO will be needed to maintain the same level of glycemic control.”

“At steady state, the 24 h glucose lowering effect (GIR-AUC0–24) of TOUJEO 0.4 U/kg was approximately 27% lower with a different distribution profile than that of an equivalent dose of LANTUS.”

The data are also potentially confounded by very heterogeneous background therapy, with 13 patients being previously insulin-naïve, four having been on only basal insulin and five and eight patients having used basal-bolus and premixed insulin, respectively, and hence using bolus insulin during the cross-over study [1]. This heterogeneous background therapy is of particular concern when it comes to the stratification of patients by albumin level because the baseline characteristics of the two groups were not reported [2].

That time in hypoglycaemia in the cross-over study was linked to albumin level nevertheless merits further attention. The authors note a diurnal change in serum albumin, with serum abumin levels rising in the daytime and decreasing at night; and suggest that this diurnal change might lead to increases in free degludec concentrations at night-time raising the risk of nocturnal hypoglycaemia [1]. In fact, most of the time in hypoglycaemia was nocturnal with both insulins, and in patients with average albumin levels both above and below 3.8 g/dL. The dynamic mean glucose levels of eight patients by insulin were plotted in Fig. 2 of one of their publications [2] (reproduced in the present publication as Fig. 1). These patients were selected for having comparable pre-breakfast glucose levels of approximately 100 mg/dL; it was noted that they had a mean serum albumin level of 3.6 g/dL. The traces in the figure show the nocturnal fall in mean glucose with both insulins following three daytime peaks that are presumably associated with meals. The degludec glucose curve could be interpreted as showing a greater peak:trough ratio across 24 h, but few data were presented in the original article to support this, and no information was given about the use in these patients of bolus insulins, which would greatly impact the daytime profiles. It cannot be excluded, therefore, that this is a chance finding or a non-causal association.

The present authors would like to note that the principle of albumin binding as a protraction mechanism was originally developed for insulin detemir in the expectation that it would be safe due to the vast ratio of albumin binding sites to insulin molecules. In the case of degludec, the plasma concentration is very low (typically < 0.01 μmol/L) at anticipated clinical doses [7] compared with the normal serum albumin concentration of approximately 600 μmol/L [8]. Therefore, degludec will occupy < 0.01% of total albumin molecules, and the fraction occupied would remain negligible even in patients with hypoalbuminaemia. Furthermore, it should be remembered that degludec, like any insulin, is individually titrated to the patient’s glycaemic response. For the free degludec fraction to increase significantly in an individual, therefore, would require that there be very significant changes in that person’s albumin concentration.

Nevertheless, any safety concern must be taken seriously and investigated further. Therefore, we performed a post hoc analysis of the DEVOTE trial database to investigate whether there is a potential risk signal in patients with low albumin levels. DEVOTE was a large-scale, event-driven, randomised, double-blinded, parallel-group cardiovascular outcomes trial comparing degludec with glargine U100 in more than 7600 patients, with a mean follow-up time of just under 2 years [9]. DEVOTE was conducted in accordance with the Declaration of Helsinki and International Conference on Harmonization Good Clinical Practice Guidelines, was approved by all local independent ethics committees/institutional review boards and required written informed consent from each patient. As well as the primary composite endpoint of major adverse cardiovascular events (MACE), DEVOTE also assessed severe hypoglycaemia as a secondary endpoint. MACE occurred in 8.5% of the degludec group and 9.3% of the glargine U100 group (hazard ratio 0.91; 95% confidence interval 0.78, 1.06), which confirmed non-inferiority for degludec. At a mean 24-month HbA1c of 7.5% ± 1.2% in both groups, adjudicated severe hypoglycaemia had occurred in 4.9% of the degludec group and in 6.6% of the glargine U100 group (rate ratio 0.60; p  < 0.001). Rates of other adverse events did not differ between the two groups.

We also modelled for each insulin, using Cox regression, the proportion of patients predicted to have a first severe hypoglycaemic event within a year of commencing DEVOTE according to baseline serum albumin concentration (Fig. 2). Interestingly, the modelling revealed an apparent inverse relationship between risk and albumin concentration with both insulins; however, the absolute risk was very small, and was lower with degludec than with glargine U100 across the entire range of albumin values available, albeit that confidence intervals widened at very low levels due to decreasing patient numbers. The Kawaguchi study also showed a higher risk of hypoglycaemia in the lower-albumin stratum of patients for both insulins, but it was in this stratum that there was a significant difference between the insulins in 24-h mean glucose levels [1].

We acknowledge that DEVOTE was a comparison involving glargine U100 rather than U300 and that the study only captured data on severe hypoglycaemia. However, while there may be a slight increase in hypoglycaemia risk with decreasing albumin level, the DEVOTE data do not show an increased relative risk for degludec versus a comparator basal insulin and do not show any albumin-related safety signal concerning degludec.

The authors thanks Yuiko Yamamoto (Novo Nordisk) for her review of and input to the manuscript. Medical writing and editorial support were provided by Murray Edmunds and Clare Lowe of Watermeadow Medical, an Ashfield Company, part of UDG Healthcare plc, funded by Novo Nordisk.

All named authors meet the International Committee of Medical Journal Editors (ICMJE) criteria for authorship for this article, take responsibility for the integrity of the work as a whole, and have given their approval for this version to be published.

This article is based on previously conducted studies that were conducted according to required ethical standards. The commentary concerns a cross-over study that was approved by the ethics committee of Minami Osaka Hospital (no. 2016-6), and was executed in accordance with the Declaration of Helsinki, with all patients providing informed consent before entering this study. Our commentary also presents new data from DEVOTE, which was conducted in accordance with the Declaration of Helsinki and International Conference on Harmonization Good Clinical Practice Guidelines, and had a protocol approved by independent ethics committees or institutional review boards for each centre, with written informed consent obtained from each patient before any trial-related activities.