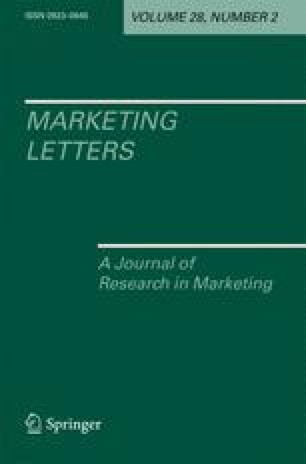 Just as consumers ascribe personality traits, for example social skills and competence, to other people based on their physical attractiveness (Dion et al. 1972; Goldman and Lewis 1977), consumers also make inferences about product attributes based on a product’s visual appeal (Bloch 1995; Creusen and Schoormans 2005). While past research provides solid knowledge on the design factors that make products more or less attractive (Blijlevens et al. 2011; Veryzer and Hutchinson 1998), it has neglected to examine the influence of the context, in which a product is presented, on consumers’ aesthetic appraisal of products. This is surprising considering the fact that products are always perceived in some kind of context, be it a website, an advertisement, a store, or consumers’ homes. Consequently, knowing how the context affects consumers’ perceptions of products certainly helps companies to display them in a manner that makes them appear most attractive.

The objective of this research is to theoretically and empirically examine context effects in consumers’ aesthetic appraisal of products. Specifically, by drawing on social cognition theory (Mussweiler 2003; Schwarz and Bless 1992), we investigate whether consumers perceive products as more or less attractive depending on the attractiveness of the visual context in which the products are presented. Further, we explore whether perceived product attractiveness subsequently affects consumers’ perceptions of product quality. In a first experiment, we investigate these context effects using more and less attractive websites. In a second experiment, we validate and extend the results using print advertisements as contexts and, additionally, examine whether higher ratings of product attractiveness translate into higher purchase intentions.

Research in cognitive psychology has successfully demonstrated that the context affects consumers’ perceptions of target stimuli (Bless and Schwarz 2010; Lee and Suk 2010). Context effects describe processes of consumers’ stimulus perceptions that are affected by the environment in which the stimulus is perceived. The concept of cognitive accessibility explains the circumstances under which consumers use contextual information in order to interpret and evaluate a target stimulus. The basic notion of this concept is that the more cognitively accessible information is, the more likely that information is to affect the perception of the target stimulus (Stapel 2007).

In the present research, we do not expect contrast effects to occur because the first condition (context and target stimulus belong to the same category) is not satisfied.

Following this reasoning, we expect the occurrence of assimilation effects to be moderated by consumers’ product familiarity, which is defined as “the number of product-related experiences that have been accumulated by the consumer” (Alba and Hutchinson 1987, p. 411). Specifically, we propose that assimilation effects occur for unfamiliar products, but not for familiar products. When consumers are highly familiar with a product, they have encountered numerous products and gained experience in appreciating various product appearances. Thus, consumers are able to interpret the attractiveness of a familiar product independently from the context in which the product is presented. However, when consumers encounter a product they are unfamiliar with or have even never seen before, they have no prior experience with the product and, thus, lack the ability to judge the product’s attractiveness. Thus, consumers may use the attractiveness of the visual context in forming an impression about the product’s attractiveness leading to assimilation effects. Thus, we hypothesize:

Consumers make inferences about numerous product attributes, including functional attributes such as product quality, through a product’s visual appearance (Bloch 1995; Creusen and Schoormans 2005). A positive relationship between stimulus attractiveness and product quality has been found in several contexts such as websites (Wang et al. 2011) and retail stores (Richardson et al. 1996). In fact, attractiveness and quality are directly related through the “what is beautiful is good” stereotype (Dion et al. 1972). Researchers have shown that attractive people are more positively evaluated in terms of social skills (Goldman and Lewis 1977) and are believed to be more competent and successful (Dion et al. 1972) compared to less attractive people. Further, in an advertising context, a spill-over effect exists in which physically attractive testimonials used in advertisements lead to more positive perceptions of product quality than physically less attractive testimonials (Petroshius and Crocker 1989).

A total of 194 students from a European university participated voluntarily in study 1 (135 female, M age = 24.63). Participants were randomly assigned to a 2 (unattractive vs. attractive website) × 2 (unfamiliar vs. familiar product) between-subjects design.

To create the stimuli, two pretests were conducted. In the first pretest, 59 participants (31 female, M age = 23.60) rated their familiarity with 30 products from various categories on the items by Roehm and Sternthal (2001). Results indicated to use a pineapple slicer as the unfamiliar product and a cooking pot as the familiar product (M pineapple slicer = 2.58, M cooking pot = 6.37, p < 0.01).

In the second pretest, 52 participants (33 female, M age = 24.83) were randomly assigned to a 2 (unattractive vs. attractive website) × 2 (unfamiliar vs. familiar product) design. The first factor was manipulated between participants and the latter within participants. We created two screenshots of a fictitious online retailer. Literature shows that attractive websites are high in classical and expressive aesthetics, whereas unattractive websites are low in both aesthetic dimensions (Tractinsky et al. 2006). While classical aesthetics refers to the clarity and order of the web design, expressive aesthetics refers to the richness and creativity of the web design. In line with previous literature (Cai and Xu 2011; Wang et al. 2011), we manipulated the websites’ classical aesthetics by varying the logical organization of different website elements as well as the legibility of font type. We manipulated expressive aesthetics by using different text and background color combinations. We did not make any changes in terms of content between the two websites. The participants rated the screenshots on the 9-item classical/expressive web aesthetics scale (Cai and Xu 2011). Further, the participants rated how realistic they found the website (“I can imagine that this website really exists” and “I have seen a website like this before”) and the content of the website based on Zhang and von Dran (2001) (“The level of information on this website is appropriate” and “The content of this website is relevant”). Results of a 2 × 2 MANOVA showed only significant main effects for website attractiveness, while all main effects for product familiarity as well as all interaction effects were not significant (all p > 0.300). We therefore merged the data across the two different products.

After processing the stimulus, participants indicated their perceptions of product quality on the items provided by Dodds et al. (1991) (“This product seems to be very reliable,” “The manufacturing quality of this product seems very high,” “The quality of this product is very high,” “This product seems to be very dependable,” and “This product is likely to be durable”; α = 0.91). Perceived product attractiveness was measured using the items by Page and Herr (2002) (“unattractive/attractive” and “not beautiful/beautiful”). As a manipulation check, the participants indicated the website’s classical (α = 0.78) and expressive aesthetics (α = 0.96), the degree of realism of the website (“I have seen a website like this before”), as well their familiarity with the product.

A total of 200 US consumers, recruited via Mechanical Turk, participated in study 2 (84 female, M age = 35.98). The participants were randomly assigned to a 2 (unattractive vs. attractive ad) × 2 (unfamiliar vs. familiar product) between-subjects design.

Similar to study 1, two pretests were conducted. In the first pretest, 37 participants (15 female, M age = 34.39) rated their familiarity with 16 products from different product categories. In order to use products from the same product category, we chose the pineapple slicer as the unfamiliar product and the toaster as the familiar product (M pineapple slicer = 2.43, M toaster = 5.96, p < 0.01).

In the second pretest, 189 participants (84 female, M age = 38.75) were randomly assigned to a 2 (unattractive vs. attractive ad) × 2 (unfamiliar vs. familiar product) between-subjects design. A professional graphic designer created the advertisements by varying the degree of classical and expressive aesthetics. The participants rated the advertisements on the 9-item classical/expressive aesthetics scale (Cai and Xu 2011), which was adapted to the advertisement context. Further, the participants rated the content of the advertisement as well as the believability of the advertisement based on the items by Gürhan-Canli and Maheswaran (2000). Results of a 2 × 2 MANOVA only revealed significant main effects for ad attractiveness, while all main effects for product familiarity as well as all interaction effects were not significant (all p > 0.200). We therefore merged the data across the two different products.

The same measures as in study 1 were used to assess perceived product quality (α = 0.96) and perceived product attractiveness. Additionally, the participants indicated how likely they would purchase the product from 1(“very unlikely”) to 7(“very likely”). Finally, the participants assed the advertisement’s classical (α = 0.91) and expressive aesthetics (α = 0.97), the degree of realism of the ad, as well as their familiarity with the product on the same items used in study 1.

Our findings make important contributions to the literature. First, we provide evidence for the existence of assimilation effects in consumers’ aesthetic appraisal of products. While previous studies have mainly focused on the relationship between product form and consumers’ aesthetic appraisal, our results suggest that when the consumers are unfamiliar with a product, they take the attractiveness of the context, in which the product is presented, into account when judging the product’s attractiveness. Second, we contribute to Bloch’s (1995) theoretical propositions by empirically showing that consumers’ responses to a product’s visual appearance are influenced by the context in which the product is perceived. Third, our results provide empirical proof for the “what is beautiful is good” stereotype (Dion et al. 1972) in a consumer product context. In both the experiments, perceived product attractiveness had a positive effect on perceived product quality.

From a managerial perspective, our findings assist marketers to more effectively position their products and to communicate their products’ visual appeal. Specifically, we show that a visually appealing context is more important when consumers are unfamiliar, rather than familiar, with products. When the consumers are unfamiliar with products, they perceive products more attractive when the products are placed in a visually appealing context. This situation may occur when radically new products are launched, when companies seek to target new customer segments, when buying a gift for someone else, or when parents want to buy something for their children. In these situations, it is critical for marketers to present their offerings in a context that is as visually appealing as possible, be it a website, an advertisement, or a department store. For example, when companies launch new products, which are unfamiliar to consumers, these companies may profit from using advertisements with superior aesthetic appeal. Likewise, such companies could use an aesthetically appealing context in order to compensate for a possible lack of experience and expertise in producing products with a superior visual design.

Despite these advances, our research has limitations that suggest directions for future research. First, we limited our research to the investigation of assimilation effects in consumers’ aesthetic appraisal of products. A recent study by Blijlevens et al. (2012) provides evidence that consumers perceive typical products as more typical when presented in an atypical context than when presented in a typical context. It would be interesting to investigate whether consumers judge an attractive product as more attractive when the product is placed among unattractive products than when it is placed among attractive products. Second, we limited the context to websites and advertisements. Researchers should investigate the effects with products placed in other contexts, for example retail stores. Third, it is likely that personality characteristics moderate the existence of assimilation effects. For example, consumers with a high centrality of visual product aesthetics (CVPA; Bloch et al. 2003) might be less influenced by the attractiveness of the context compared to those with a low CVPA. Likewise, the effect might be moderated by the product category, such that it is stronger for hedonic products for which aesthetics is of great importance to consumers (e.g., clothing, furniture), compared to utilitarian products for which aesthetics is only of minor importance (e.g., tooth paste, batteries).