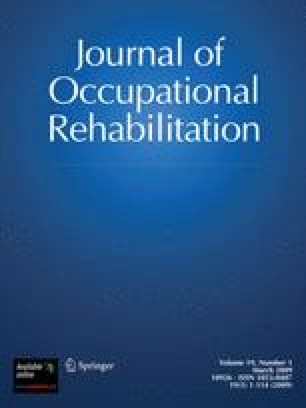 Mr. Ross Iles is supported by an Australian Postgraduate Award and is a participant in the Work Disability Prevention CIHR Strategic Training Programme at the Universite de Sherbrooke, Canada.

Criteria Required to Satisfy Quality Ratings and Justification of Criteria

S2: The stage when initial measures were applied is clearly stated

In order to determine whether selection bias existed, a clear description of the sampling strategy and referral process should be given [9, 48]. To satisfy this criterion it was determined the study had to clearly describe that either random allocation or consecutive cases were selected in order to eliminate bias.

S4: Important characteristics of the sample were described

To adequately describe sample characteristics, a minimum of mean age and proportion of either sex was required as well as the distribution of all measures taken at baseline.

S5: The setting and study site were clearly described

To satisfy the last sampling criterion, the study had to give a description of the study setting, including the referral process, as this information is also necessary to determine the internal validity of the study [9, 49].

PI1: Clearly defined constructs of what is measured was provided

In order to eliminate bias when selecting potential prognostic indicators, the variables chosen should have a clear, sensible and reproducible definition [9, 10]. This criterion was satisfied if suitable definitions were provided.

PI2: Justification of the measures used was given

Variables that may affect activity limitation due to NSLBP are recognised as multifactorial, spanning personal, social and environmental domains [5, 50]. Therefore to satisfy the quality criteria studies had to provide a theoretical background as justification of the selection of the prognostic indicators measured.

A1: Multivariate techniques were used to adjust for potential confounding variables

Activity limitation due to NSLBP is a multifactorial process and a result of interactions between multiple variables. The aim of multivariate techniques in prognosis is to produce an equation that arrives at a predicted outcome that is as close as possible to the measured outcome [16]. Therefore a study satisfied this criterion if it employed a multivariate analysis such as multiple linear regression or Cox hazard ratios.

A2: The analysis avoided over fitting the data

In order to perform multivariate analysis there must be a high enough ratio of participants to variables measured, otherwise the derived equation will match every case and yield no useful information on prognosis [16]. Over fitting (entering too many variables compared to participants) will reduce the validity of a predictive model. Babyak [12] recommends a ratio of at least 15 participants to each variable entered into the equation and this rule of thumb was used to determine whether a study satisfied the second criterion.

A3: Prospective validation in another cohort was performed

The development of a prognostic model based on a particular sample may only be applicable to, or ‘fit’ the sample it was derived from. Prospective validation on a group of participants different to the group used to establish the model is essential to determine if it is generalisable to all people from the same population [9].

FU1: The duration of follow up was greater than or equal to 6 months

FU2: The data was complete for at least 80% of the sample measured at baseline

The third follow up criterion required complete data for at least 80% of the sample measured at baseline, as complete data is important in determining the validity of results [9, 10, 48, 49].

To avoid bias in assessing outcomes, blinded assessment (determining outcomes unaware of group allocation or predictor variables) should be used [9, 10, 48, 49]. This criterion was satisfied if it was clear from the study that the assessment of outcome was performed without knowledge of baseline variables of participants.