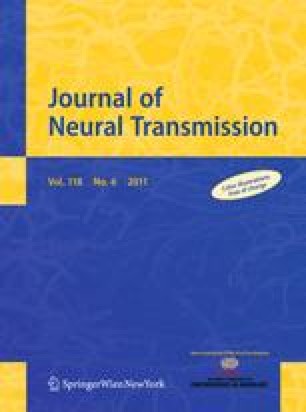 In the present study, we demonstrated that low, ineffective doses of N-methyl-d-aspartic acid (NMDA) receptor antagonists [competitive NMDA antagonist, CGP 37849, at 0.312 mg/kg intraperitoneally (i.p.), antagonist of the glycineB sites, L-701,324, at 2 mg/kg i.p., partial agonist of glycineB sites, d-cycloserine, at 2.5 mg/kg i.p.] administered jointly with an ineffective dose of the benzodiazepine, chlordiazepoxide (CDP, 2.5 mg/kg i.p.), significantly increased the percentage of time spent in the open arms of the elevated plus-maze (index of anxiolytic effect). Furthermore, CDP-induced anxiolytic-like activity (5 mg/kg i.p.) was antagonized by NMDA (75 mg/kg i.p.) and by an agonist of glycineB sites of the NMDA receptor complex, d-serine [100 nmol/mouse intracerebroventricularly (i.c.v.)]. The present study showed a positive interaction between γ-aminobutyric acid (GABA) and glutamate neurotransmission in the anxiolytic-like activity in the elevated plus-maze test in mice and this activity seems to particularly involve the NMDA receptors.

γ-Aminobutyric acid (GABA) is the principal inhibitory neurotransmitter in the mammalian central nervous system (Sieghart 1995; Sieghart et al. 1999). Dysfunction of the central GABA system has long been associated with anxiety spectrum disorders (Nutt and Malizia 2001; Lydiard 2003; Nemeroff 2003). It is known that in both, humans and animals, positive modulators of GABAA ionotropic receptors produce anxiolytic-like activity, while the negative modulators evoke anxiety (Kalueff and Nutt 1996; Nutt and Malizia 2001). Thus, for many years, the leading treatment of anxiety disorders was benzodiazepines that enhance GABAergic inhibitory neurotransmission through allosteric modulation of GABAA receptors. They are still preferred due to their efficacy, rapid onset of action, and safety (Stahl 2002), but their adverse effects: sedation, cognitive impairments, undesirable interactions with other drugs, drug dependence and abuse mostly limited their use (Uhlenhuth et al. 1999; Stahl 2002). Moreover, these treatments are effective only in about 70% of patients and full remission is observed only in 40% of patients; thus, the novel therapeutic strategies are extensively sought.

Glutamate, which is the chief excitatory neurotransmitter in the mammalian central nervous system, is widely distributed throughout the brain and mediates its effects via stimulation of ionotropic and metabotropic receptors (Kew and Kemp 2005). The ionotropic glutamate receptor family is ligand-gated channels divided into three groups named after their selective agonists [N-methyl-d-aspartate (NMDA), α-amino-3-hydroxyl-5-methyl-4-isoxazole-propionate (AMPA), and kainate] and their density is high in cortical and limbic regions being implicated in the mediation of fear and anxiety (Krystal et al. 1999). The preclinical data indicate that a number of different classes of NMDA receptor antagonists, acting at specific sites located on the NMDA receptor complex, produced anxiolytic-like activity in tests of anxiety in rodents (Dunn et al. 1989; Sharma and Kulkarni 1993; Płaźnik et al. 1994; Karcz-Kubicha et al. 1997; Kotlińska and Liljequist 1998; Przegaliński et al. 2000; Poleszak et al. 2004). In humans, memantine and d-cycloserine are effective in obsessive–compulsive disorder (Feusner et al. 2009; Abramowitz et al. 2009; Aboujaoude et al. 2009), and moreover, d-cycloserine was effective in post-traumatic stress disorder (Amiel and Mathew 2007). Despite these findings, the numerous adverse effects produced by competitive and non-competitive NMDA antagonist limited their potential clinical use (Tricklebank et al. 1989; Willetts et al. 1990). Profound side effects, typical for competitive and non-competitive NMDA receptor antagonist, do not occur after administration glycineB site modulators (Parsons et al. 1998). This modulatory site of the NMDA receptor complex is a co-agonist site with affinity for glycine and d-serine (Wood et al. 1989, 1996). Antagonists and partial agonist of glycineB sites inhibit the function of the NMDA receptor complex and produce effects which are similar to those produced by competitive and non-competitive NMDA receptor antagonist. It was shown that glycine potentiated the action of glutamate at NMDA receptors (Johnson and Ascher 1987), and antagonists and partial agonist of the glycineB sites inhibited the function of the NMDA receptor complex and produced anxiolytic-like action in several experimental models of anxiety (Karcz-Kubicha et al. 1997; Przegaliński et al. 1998; Kotlińska and Liljequist 1998).

In this study, we investigated the interaction between glycineB sites ligands and benzodiazepine/GABAA receptor ligand, chlordiazepoxide (CDP) in the elevated plus-maze test in mice.

The experiments were carried out on adult male Albino Swiss mice (25–30 g) purchased from the licensed breeder (Kołacz, Warsaw, Poland). The animals were kept in cages (up to 10 per cage) on a natural day–night cycle with free access to food and water and they were used after at least 7 days of acclimatization to laboratory conditions. Each experimental group consisted of 8–12 animals. The experimental protocol was approved by the Local Ethics Committee at the Medical University of Lublin (license no. 31/2007), and all the procedures were in strict compliance with the European Communities Council Directive of 24 November 1986 (86/609/EEC).

The experiments were carried out on mice according to the method of Lister (1987). The plus-maze apparatus was made of black polyvinyl chloride and consisted of two open (30 × 5 cm) and two enclosed (30 × 5 × 15 cm) arms. The arms extended from a central platform of 5 × 5 cm. The apparatus was mounted on a stable base raising it 38 cm above the floor and was illuminated by red light. The test consisted of placing a mouse in the center of the apparatus (facing an enclosed arm) and allowing it to freely explore the maze. The number of entries into the open arms and the time spent in these arms were scored for a 5-min test period. An entry was defined as placing all four paws within the boundaries of the arm. The following measures were obtained from the test: the total number of arm entries, the percentage of entries into the open arms, the time spent in the open arms expressed as a percentage of the time spent in both the open and closed arms. Anxiolytic activity was indicated by increases in time spent in open arms or in a greater number of open arm entries. Total number of entries into either type of an arm was used as a measure of the overall motor activity.

The obtained data were evaluated by two-way analysis of variance (ANOVA) followed by Bonferroni’s post hoc test. All results are presented as a mean ± standard error of the mean (SEM). A p ≤ 0.05 was considered statistically significant.

Anxiolytic-like effect of joint administration of CDP and L-701,324 in the elevated plus-maze test

Effect of CDP and NMDA ligands on the total arm entries

The number of the total arm entries for all experimental groups

In our study, the combined treatment with CDP and L-701,324 (a glycineB site antagonist) or d-cycloserine (a glycine site partial agonist), all at low, ineffective doses, increased the time spent in the open arms of the elevated plus-maze, with no effects on the number of total entries (Table 1). Because the obtained data indicate a lack of effect on the locomotor activity, we can assume that this combination produced an anxiolytic-like activity. The anxiolytic-like activity of CDP was reduced by NMDA or by d-serine, what suggests the involvement of NMDA receptor complex in the anxiolytic activity of CDP in the elevated plus-maze in mice. The interaction between NMDA and GABAergic neurotransmission in anxiety assessments in animals was shown in other experiments. The anxiolytic-like activity of MK-801 was enhanced by diazepam, antagonized by the benzodiazepine receptor antagonist (Ro-15-1788) and reversed by the anxiogenic agent, β-carboline FG-7142 (Sharma and Kulkarni 1993).

To summarize, the present study indicates the involvement of the NMDA receptor complex in the anxiolytic-like activity of CDP in the EMP in mice. Our results also suggest that full anxiolysis might be possible with a reduced dose of benzodiazepines when co-administered with NMDA receptor antagonists and this might substantially reduce side effects and the risk of the benzodiazepine dependence. Clinical trials are necessary to determine if such a combination is of a potentially therapeutic value in humans with anxiety disorders.