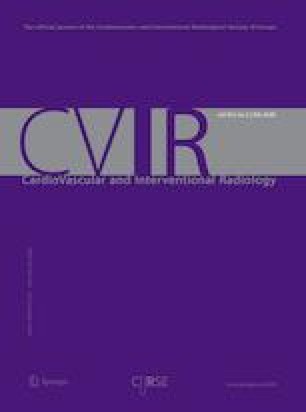 Peptide receptor radionuclide therapy (PRRT) and radioembolization are increasingly used in neuroendocrine neoplasms patients. However, concerns have been raised on cumulative hepatotoxicity. The aim of this sub-analysis was to investigate hepatotoxicity of yttrium-90 resin microspheres radioembolization in patients who were previously treated with PRRT.

Forty-four patients were included, who underwent a total of 58 radioembolization procedures, of which 55% whole liver treatments, at a median of 353 days after prior PRRT. According to RECIST 1.1, an objective response rate of 16% and disease control rate of 91% were found after 3 months. Clinical response was seen in 65% (15/23) of symptomatic patients after 3 months. Within 3 months, clinical toxicities occurred in 26%. Biochemical and haematological toxicities CTCAE grade 3–4 occurred in ≤ 10%, apart from lymphocytopenia (42%). Radioembolization-related complications occurred in 5% and fatal radioembolization-induced liver disease in 2% (one patient). A median OS of 3.5 years [95% confidence interval 1.8–5.1 years] after radioembolization for the entire study population was found.

With the introduction of radiolabelled somatostatin analogs (SSA), a.k.a. peptide receptor radionuclide therapy (PRRT), especially with 177Lu-DOTATATE, treatment of neuroendocrine neoplasms (NEN) has evolved and results in long progression-free survival (PFS) and overall survival (OS). The main accelerator of this development was the recent publication of the NETTER-1 trial, combining 177Lu-DOTATATE with long-acting SSA versus high dose SSA alone (control group). 177Lu-DOTATATE resulted in a significantly prolonged PFS of 28.4 months compared to 8.5 months in the control group [1, 2]. Because of the long PFS after PRRT in these patients, improving quality of life or postponing deterioration of quality of life becomes even more important, also seen in the NETTER-1 study [3]. Objective response rates according to Response Evaluation Criteria In Solid Tumours (RECIST) version 1.1 assessments were limited, with only 1% complete response (CR) and 17% partial response (PR) [1].

Transarterial radioembolization has gained particular interest in the treatment of liver metastases of neuroendocrine neoplasms (NELM). Radioembolization with yttrium-90 (90Y) resin microspheres (SIRSpheres®, Sirtex Medical, Sydney, Australia) has a high intrahepatic success rate and a limited toxicity profile. In patients treated with radioembolization, tumour reduction or stable disease according to RECIST 1.1 occurs in 16% and 75%, respectively [4]. Radioembolization alleviates NEN-related symptoms (like flushing and diarrhoea) in 79% of symptomatic patients [4]. Clinical toxicity is often abdominal discomfort, nausea and fatigue, and is limited to within the first 6 months after treatment. Biochemical and haematological toxicities higher than grade 2 according to the Common Terminology Criteria of Adverse Events version 4.03 (CTCAE) rarely occur (< 7%) [4, 5].

All retrospective data were gathered in the period of July 2015 until October 2016. The inclusion criteria were previously reported [4]: In short, patients with histologically proven NEN (surgical specimen or biopsy), of any origin, with at least baseline and 3 ± 1.5 month follow-up computed tomography (CT) or magnetic resonance imaging (MRI) and previous PRRT were used as inclusion criteria. Details on previous PRRT treatments, clinical complaints and laboratory data were gathered. Baseline characteristics were gathered according to the reporting standards recommended for radioembolization [9].

Prior to the actual radioembolization treatment, all patients received a treatment simulation during a preparatory angiography with technetium-99m macro-aggregated albumin (99mTc-MAA) and followed by a single-photon emission computed tomography (SPECT). Within weeks following the preparatory angiography and imaging, the patient received radioembolization treatment. Ethics approval was obtained according to local regulations at the participating centres.

The primary outcome parameter was hepatic response, according to RECIST 1.1 after 3 months [10]. Secondary outcome parameters included clinical response (improvement of symptoms) and clinical toxicities (adverse events) within 3 months after radioembolization. Biochemical and haematological toxicities at 4–8 weeks and at 3 months were assessed according to the CTCAE version 4.03 [5]. Radioembolization-induced liver disease (REILD) was classified according to terminology defined by Braat et al. [11]. To assess overall survival (OS), date of death or date of last contact (when lost to follow-up) was collected. Because long-term toxicity and OS might be influenced by treatments following radioembolization, additional treatments following radioembolization were collected as well.

Scatter-plots were made to identify potential correlations between toxicities, and the interval between the last PRRT cycle and radioembolization and cumulative administered PRRT activity. Survival curves were estimated using the Kaplan–Meier method and assessed with the log-rank test. The following variables were tested: radiological response after treatment, tumour grade, intrahepatic tumour load and the presence of extrahepatic disease at time of treatment [4]. P values smaller than 0.05 were considered significant in all tests. The database was analysed using IBM SPSS statistics for Windows version 23.0 (IBM, Armonk, NY).

All patients were treated between December 2006 and May 2016. A total of 58 radioembolization treatments in 44 patients with progressive NELM were included. Baseline characteristics are shown in Table 1. Most patients had diffuse liver metastases with 96% having more than 10 lesions and 93% classified as diffuse, type III pattern [12, 13]. At the time of analysis, 24/44 (54%) patients had died.
Table 1

*Including one gastric NEN

†Besides the reported systemic radionuclide treatments and radioembolization treatments

‡One patient had an LSF exceeding 20% (i.e. 33%), who subsequently received a whole liver treatment in one session without activity reduction and without complications.

Of the 44 patients, one patient received meta-iodobenzylguanidine monotherapy (131I-MIBG; strictly speaking, the molecular target is the norepinephrine transporter, which is a catecholamine pump, and not a peptide receptor, but for the purpose of this study regarded as ‘PRRT’), three patients received 90Y-DOTATOC monotherapy, 31 patients received 177Lu-DOTATATE monotherapy, and nine patients received a combination of different therapeutic radiopharmaceuticals (Table 2). Median time to radioembolization from diagnosis was 4.6 years (range 1.3–12.9 years), and median time to radioembolization from last cycle of PRRT was 353 days (range 4 days–6.3 years). No extrahepatic depositions of 99mTc-MAA were found on SPECT/CT. Median net administered 90Y activity was 1.67 GBq (range 0.4–5.5 GBq), 97% calculated by the body surface area (BSA) method. Most procedures were whole liver treatments (32/58, 55%) (Table 3).
Table 2

Systemic radionuclide treatment details prior to radioembolization in 44 patients

Treatment approaches per number of radioembolization treatments (58 procedures in total)

*Right lobe first and left lobe second with an interval of 4–6 weeks, or vice versa

An objective response rate of 16% and disease control rate of 91% were observed at 3 months according to RECIST 1.1 (CR 2%, PR 14%, stable disease 75% and progressive disease 9%). Malignancy-related symptoms were present at treatment in 23/58 (40%) of procedures prior to radioembolization. Abdominal pain (35%) and flushing (30%) were most frequently reported. Clinical response occurred in 15/23 (65%) of these patients after 3 months, with 7/23 (30%) having improvement of pre-treatment complaints and 8/23 (35%) experiencing complete resolution of pre-treatment symptoms after radioembolization. 8/23 (35%) remained symptomatic after radioembolization.

Two patients developed REILD as reported by the treating physician; the first patient was previously treated with seven cycles of 177Lu-DOTATATE (55.4 GBq). Whole liver radioembolization in one session with 2.7 GBq was performed 4.6 years after the last cycle of 177Lu-DOTATATE. The patient developed ascites without significant biochemical toxicities and ascites decreased without medical intervention, and thus this was retrospectively classified as grade 2 REILD. Six months after radioembolization, extrahepatic disease progressed and the patient received additional 177Lu-DOTATATE (5.5 GBq), without evidence of REILD.

In retrospect, one other patient developed clinical and biochemical evidence of REILD, but was not reported by the treating physician. The patient had grade 3 REILD, based on grade 2 bilirubin elevation after 4 weeks (at baseline already grade 1) and development of ascites, without evidence of tumour progression. Bilirubin levels returned to grade 1 within 3 months (Fig. 1A) and ascites resolved with additional diuretics (spironolactone and furosemide).

Treatments after both PRRT and Radioembolization

In this study, radioembolization of progressive NELM after initial PRRT resulted in a disease control rate of 91% at 3 months according to RECIST 1.1, clinical response in 65% of symptomatic patients and a long median OS of 3.4 years (41 months). Intrahepatic tumour load > 75%, and the presence of extrahepatic disease prior to treatment were negative prognostic markers for OS [4]. Occurrence of REILD after treatment was limited (5%). Our data showed no correlation between treatment toxicities and the time interval between PRRT and radioembolization, and cumulative activity of previous PRRT.

In 2012, Ezziddin et al. reported on the safety of radioembolization after previous 177Lu-DOTATATE treatment. In 23 patients a limited number of adverse events < 10% (CTCAE version 3.03 grade 3 or 4) was reported with an objective response rate of 30% (after 3 months according to RECIST 1.0) and long OS of 29 months following radioembolization [6]. These results seem quite comparable to our results. However, 35% of the cohort reported by Ezziddin et al. did develop a CTCAE v3.03 grade 1 or 2 ascites, which is a higher occurrence of ascites compared to our data (5%). Unfortunately, both the cumulative administered activity of 177Lu-DOTATATE and the time interval between 177Lu-DOTATATE and radioembolization were not reported.

Two major issues currently exist in the literature. First, there is no accepted standardized definition for radiation-induced hepatotoxicity. Especially, since the adoption of radioembolization, the definition of REILD in the literature has been vague and variable. We recently proposed a new classification system to define REILD, which could be applied to all patients, in line with the CTCAE system [11]. However, this proposed system has yet to be adopted and differs from the definitions reported in the other studies. Lack of standardized definition of hepatotoxicity prevents valid comparison of studies.

Second, there is no established quantitative relationship between radiation absorbed dose in healthy liver tissue and hepatotoxicity for radionuclide therapies. There are no conclusive dosimetric data to support this theory, and neither PRRT nor radioembolization has validated voxel-based dosimetric methods available. The previously mentioned studies only suggested this phenomenon, without providing quantitative dosimetry.

Besides the relatively short follow-up period and retrospective nature of our study, the lack of dosimetric data is the main limitation of our study. A dose–response correlation was reported in other tumour types, including hepatocellular carcinoma and colorectal carcinoma, which may be regarded as a call for additional research on dosimetry in NEN [15, 16]. Unfortunately, not all recruiting centres acquired post-treatment 90Y-bremsstrahlung SPECT or 90Y-PET imaging, making post-treatment dosimetric evaluation impossible. However, our study does describe the longitudinal medical history of the treated patients. Even after a combination of PRRT and radioembolization, there seems to be room for additional radioembolization treatments (Table 3) or even 177Lu-DOTATATE. This also emphasizes the need for accurate dosimetric data on radioembolization and PRRT in NEN patients in future studies, not only looking at tumour absorbed dose and objective response, but also at healthy tissue absorbed dose and hepatotoxicity.

Furthermore, PFS could not be measured reliably in this retrospective series since follow-up imaging intervals were not standardized across all centres. Follow-up was limited to 3 months after treatment in this cohort as most patients went on to receive subsequent treatment, even before intrahepatic PD was documented according to RECIST 1.1, while some other patients were lost to follow-up after the response assessment. Patients lost to follow-up and subsequent treatments prior to intrahepatic PD after radioembolization made imaging and toxicity follow-up beyond 3 months unreliable.

Besides the need for accurate dosimetric data in radioembolization, prospective randomized controlled studies in NEN are clearly needed. The sequencing of radioembolization amongst other treatment options deserves to be studied in carefully designed prospective trials.

All authors declare that they have no conflicts of interest.

IRB/Ethical committee approval was obtained or waived according to local regulations at each participating centre.

Need for informed consent was waived for this retrospective study by the ethical committee at each participating centre.