This video demonstrates Mucosal preservation endoscopic turbinlasty for concha bullosa. It is a simple and effective technique for conchal resection where the function of the middle turbinate is preserved. It enables easy access to the maxillary line and allows identification of the proposed site of neo-ostium in the endoscopic dacryocystorhinostomy. Endoscopic dacryocystorhinostomy (DCR) is a standard lacrimal procedure. It is not uncommon to encounter anatomical variations during an endoscopic dacryocystorhinostomy that must be addressed simultaneously with endoscopic DCR for ease of surgery and better outcomes. Additional adjunctive procedures such as septoplasty and middle turbinoplasty aim to improve access to the lateral nasal wall1. The deviated nasal septum is not uncommon, and if it prevents a clear view of the axilla of the middle turbinate should be addressed.

Sometimes it may be possible to complete endoscopic sinus surgery or endoscopic DCR despite a deviated nasal septum by decongesting it or giving a contralateral push over the septum. This septal deviation returns at the end of surgery and may cause synechiae to obstruct the neo-ostium. Moreover, operating in a crowded field may lead to mucosal lacerations, synechiae and failure of DCR surgery.

Another commonly seen condition is concha bullosa. Concha bullosa is the pneumatization of the middle turbinate. It is a common anatomic variant of the middle turbinate and is best diagnosed on a CT scan. The incidence of concha bullosa varies from 8 to 53%.1 Radical resection of the turbinate may lead to severe functional disturbances leading to secondary atrophic rhinitis. The “empty nose” syndrome results in disturbed climatization and interferes with pulmonary function1.

Conchoplasty in endoscopic dacryocystorhinostomy is needed when the concha blocks access to the lacrimal sac area. 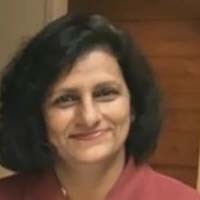 Dr. Nishi Gupta is currently the head of the Department of Otorhinolaryngology and associate medical director at Dr Shroff’s Charity Eye and ENT hospital New Delhi India. Her initial work on Endoscopic Dacryocystorhinostomy was compiled and was released by Dr Shroff’s Charity Eye & ENT hospital in the form of a video cassette in 1999. She subsequently published 3 editions of her book on Endoscopic dacryocystorhinostomy, first in 2006, the second edition in 2011 and the third one in 2020 with Springer. She has published articles in various national and international journals and is a reviewer of national and 3 international journals.

Dr. Gupta obtained her MS degree in Otorhinolaryngology from Nagpur university in 1992, followed by a Postgraduate diploma in hospital management from NIHFW Delhi and training at Great Ormond Street Hospital for Children London.

This book explains and elaborates upon the procedure of endoscopic dacryocystorhinostomy in a variety of indications.It systematically deals with the anatomy of the lacrimal drainage system, covering all...

Hello, my name is Mishi Gupta, and I am working as Deputy Medical Director and Head Department of Otohinolaryngology at Dr. Shroff’s Charity Eye and ENT Hospital, New Delhi, India. This is a video on endoscopic septoplasty and conchoplasty during endoscopic dacryocystorhinostomy. Now, endoscopic septoplasty is a minimally invasive technique to correct any gross septal deviation.

And it is indicated in cases where the access to the nasolacrimal system is compromised during endoscopic dacryocystorhinostomy. Incisions in endoscopic dacryocystorhinostomy include a caudal border incision of the septum or a posterior incision a centimeter interior to the deviated portion of the septum. So this video contains a first clip on endoscopic septoplasty using ipsilateral caudal border incision. That means the incision is given on the side of deviation.

The second video demonstrates endoscopic septoplasty using contralateral caudal border incision. So if the incision is given on the contralateral side, the advantage is that our endoscope does not get smeared with blood. And it does not interfere with our surgical procedure. The third video clip on limited endoscopic septoplasty using a posterior incision. So let’s look at the first video.