Lacrimal sac tumors pose significant surgical challenges in their management. This video describes the use of combined external and endoscopic approach in the surgical management of lacrimal sac malignancies and recurrences. It discusses the instrumentation and surgical techniques in different and complex clinical scenarios with the help of various examples. The video demonstrates the principles of combined approaches, indications for this approach, and overview of major surgical steps. It covers all the steps involved in a combined approach surgical management of lacrimal sac tumors using different clinical scenarios. It also covers the challenges and potential complications with such approaches in detail. The video will help all lacrimal surgeons, more so the experienced surgeons, and will assist them in negotiating the learning curve for the surgery.

This video serves as a useful link to the chapters with similar titles in the 2nd edition of the textbook ‘Principles and Practice of Lacrimal Surgery’ and also ‘Atlas of Lacrimal Drainage Disorders’, both edited and authored respectively by the author of this video, Dr Mohammad Javed Ali and published by Springer. The reader gets great details and bibliography, and images from these sources in addition to the surgical steps illustrated in the video for complete knowledge. 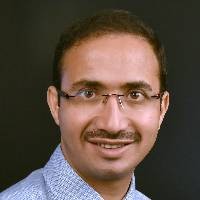 Mohammad Javed Ali is an internationally recognized clinician-scientist and currently heads the Govindram Seksaria Institute of Dacryology and is the current editor-in-chief, Seminars in Ophthalmology and also the alumni chair of ophthalmology at the L.V. Prasad Eye Institute, India. He is currently the Hong-Leong Professor at NUHS, Singapore, and Gast Professor at FAU, Germany. Javed is among the rare recipients of the Senior Alexander Von Humboldt Award and the Shanti Swarup Bhatnagar Prize, the highest multi-disciplinary scientific award by the Government of India. He described 3 new diseases of the lacrimal system along with their classifications and clinicopathologic profiles. He was honoured by the 2015 ASOPRS Merrill Reeh Award for his path-breaking work on etiopathogenesis of punctal stenosis and 2020 American Academy-ASOPRS Lester Jones Award for outstanding contributions to the field of ophthalmic plastics and reconstructive surgery. His textbook “Principles and Practice of Lacrimal Surgery” is considered to be the most comprehensive treatise on the subject and his other treatise ‘Atlas of Lacrimal Drainage Disorders’, is the first of its kind. He has to his credit 442 publications at the time of this writing and 10 editorial board positions and has delivered 315 conference lectures, including 12 keynote addresses. He has conducted 25 instruction courses and 29 live surgical workshops and has been honored with 35 national and international awards.

Principles and Practice of Lacrimal Surgery

This second edition of the highly successful and comprehensive text on lacrimal disorders presents the latest developments in this rapidly evolving field. The new edition includes six new chapters, additional...

Written by an expert in the field, this book is a comprehensive and up-to-date guide to the evaluation and management of lacrimal drainage disorders. Lacrimal disorders are one of the most common conditions...

This manual covers all aspects of endoscopic surgery of the lacrimal drainage system. Step-by-step descriptions are provided of endoscopic dacryocystorhinostomy (DCR) and its use in revision surgery,...

Hello, everyone. My name is Mohammad Javed Ali. And today, we will be discussing certain complex lacrimal surgeries, a combined external and endoscopic approaches for lacrimal sac malignancies.

A brief about myself. I head the Govindram Seksaria Institute of Dacryology at LV Prasad Eye Institute. And I work in lacrimal sciences, both as a clinician and as a scientist.

As you may be aware, the tumors of the lacrimal sac can have a wide spectrum of presentation. Swellings, which are above the medial canthal tendon, hemolacria, as you can see in the middle picture, or symptoms that can lead to infiltration of the surrounding structures.

The management also depends on the extent of the tumors, other than the histopathological types, like you can see a tumor here, which is extending into the inferior meatus. And this obviously would require a different surgical approach than those which are isolated within the lacrimal drainage.

So let us just discuss briefly the history of the first clinical scenario. This is a 35-year-old male who had come with complains of swelling at the left medial canthus and the left lower lid. Examination and irrigation was suggestive of lacrimal drainage obstruction.

Endoscopic evaluation showed that there was a DCR ostium that was made earlier elsewhere, six months back, and the ostium was filled with a grayish-red tumor, which was very vascular, with feeder vessels. And there was also a lesion in the inferior meatus, a mass lesion, pinkish-white, that was extending from the bony nasal lacrimal duct into the inferior meatus.

Now, if you look at the left medial canthus of this gentleman, you can see a nice scar. So we went back and revisited the history. The history was suggestive that earlier he had underwent a DCR surgery, and the surgeon elsewhere found a mass lesion, took a biopsy that was proven to be a solitary fibrous tumor and then was referred here.

Radiological examination at this point showed that there was a lesion arising from the lacrimal sac, extending into the left anteromedial orbit as well as the left bony nasal lacrimal duct. If you look at the bony window, the picture on the right, you can see that the bony nasal lacrimal duct is grossly dilated without any bony destruction. And you can see that the mass lesion is getting into the inferior meatus through the dilated bony NLD. This corroborates very well with the endoscopic image that we saw earlier.

So we went ahead and excised both the orbital components and the bony nasal lacrimal duct component in total. And this image of the endoscopy is of the bony nasal lacrimal duct that shows complete excision of the lesion. We will discuss the surgical techniques in the videos. Histopathological examination and immunohistochemistry examination were suggestive of a solitary fibrous tumor.

The second scenario that I would like to discuss is– the second scenario is of a gentleman, 69-year-old male, who also had an incision biopsy elsewhere and was proven to be a poorly differentiated adenocarcinoma of the lacrimal sac. You can see in the picture that there is a nice scar at the medial canthus. And the radiological picture showed that the mass lesion has gone quite a bit into the anteromedial orbit as well as the bony nasal lacrimal duct.

Inferior meatus endoscopic examination shows, you can see there’s a nice dilated bony nasal lacrimal duct, the lesion extending right into the inferior meatus. Fortunately, it does not violate the mucosa, has not yet violated the nasal mucosa as such.

And the picture on the right is intraoperative image, where you can actually see the lesion in the bony nasal lacrimal duct. The lesion was completely excised in total. And you can see that the histopathology was confirmatory of the earlier diagnosis of a poorly differentiated adenocarcinoma.

So I hope this would be two exciting videos, a little complicated, but it is something which are essential to be in the armamentarium of any lacrimal surgeon.