Stress urinary incontinence (SUI) is the complaint of involuntary loss of urine during episodes of high intraabdominal pressure like laughing, sneezing, jumping, etc. It occurs due to loss of urethral support resulting in inadequate urethral closure against episodes of high intra-abdominal pressure. On failure of conservative and medical treatment, surgical procedure is advised to restore the normal intra-abdominal position of the urethra by reinforcing its supports. This video shows the steps of the Transobturator approach of Sling placement in a female patient. The viewer would be able to see the steps of the procedure including careful evaluation and selection of the patient, moving on to a detailed description of all steps in a simplified way and tips of avoiding potential complications by using the correct surgical technique. The learning objective is to provide viewers the step by step approach of performing the Transobturator approach (TOT) with ease and without fear of complications, and thus will be helpful for all Urologists, Gynecologists, Urogynecologists, who are dealing with Female Urology.

This video shows the steps of the Transobturator approach of Sling placement in a female patient. The viewer would be able to see the steps of the procedure including careful evaluation and selection of the patient, moving on to a detailed description of all steps in a simplified way. 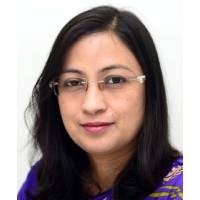 Dr Amita Jain is a graduate from King George Medical College, Lucknow, India and then she obtained her Masters in Obstetrics & Gynaecology from Sarojini Naidu Medical college, Agra, India in 2003. Thereafter she received training in endoscopic surgeries from BEAMS, Mumbai, India followed by fellowship in Urogynaecology from James Cook University, Queensland, Australia in 2009. At present she is the General Secretary of SAFUG (South Asian Federation of Urogynaecology), Executive Committee Member of GIBS (Global IC and Bladder Pain Syndrome Society) and an active member of IUGA (International Urogynecological Association). Also she served as Chairperson of Urogynaecology Subcomittee AOGD ( Association of Obstetricians & Gynaecologists of Delhi) 2017-2019.

She has received many prestigious awards including International Continence Society Travel Award and Appreciation Award from Association of Obstetricians and Gynaecologists of Delhi for her valuable contribution. Besides this, she has written and published extensively on this upcoming field of Urogynecology and has several publications in peer reviewed national and international journals including book chapters. Recently she was also honoured for being nominated for the post of Southern Asia Representative of International Advisory Board at International Urogynaecological Association.

With a vast experience of regularly performing all named surgeries in urogynaecological field vaginal or abdominal (open/ laparoscopic / robotic), she has pioneered several advanced procedures in her country including dynamic MRI pelvis and 2D/3D transperineal USG as diagnostic modalities and first TVT- Abbrevo placement and robotic burch colposuspension for stress urinary incontinence. She has also organized and has been involved as a faculty in many educational conferences, CMEs & workshops, group activities and patient awareness sessions at both national and international forums and is also a part of many national projects like formation of guidelines, fellowship programmes and research. She also continues to be a reviewer of many prestigious journals like Indian Journal of Urology, International Urogynecology Journal, Proceedings in Obstetrics & Gynecology.

This book provides an in-depth insight into the symptoms and symptom complexes affecting the lower urinary tract and the underlying causative conditions. The emphasis throughout is practical and clinical,...

This book offers a detailed description of various forms of urinary diversions, including the ileal conduit, orthotopic neobladder, and a variety of continent cutaneous diversions with specific focus on the...

The causative organisms of Urinary Tract Infection are dynamic in terms of their virulence and resistance patterns, leading to challenges in the prevention and treatment of urinary infection. This is of...

Transobturator approach of sling placement-- introduction. Treatment for female stress urinary incontinence has seen revolutionary changes in the last 15 years, and minimally invasive techniques of midurethral vaginal sling placement have been proven safe and effective with patient satisfaction rates of over 90%. To reduce undesired complications of bowel and bladder injuries with transvaginal retropubic tape, the transobturator approach was introduced by Delorme in 2001, which provides a safer means to place attention free mesh tape sling with seemingly equivalent cure rates and lower rates of complications in comparison to transvaginal approach. The mean operating time is also significantly shorter, and risk of bladder injury and post-operative urinary retention, or de novo urge as incontinence, is also considerably lower than other sling procedures.