This video starts off by walking you through the creation of a simple component. Then the video shows how to leverage what you’ve built in the first component by using that component as the basis for a second. The video continues by showing how you can split your code from markup using the View and ViewModel approach, and how to set up communications between components. You’ll also cover life-cycle hooks, cascading parameters, and the concept of templated components to facilitate code reuse. 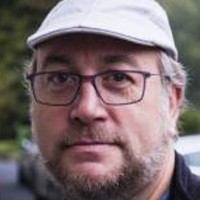 Peter Himschoot works as a lead trainer, architect, and strategist at U2U. Peter has a wide interest in software development that includes applications for the web, Windows, and mobile devices. Peter has trained thousands of developers, is a regular speaker at international conferences, and has been involved in many web and mobile development projects as a software architect.

Build web applications in Microsoft .NET that run in any modern browser, helping you to transfer your .NET experience and skills to a new environment and build browser-based applications using a robust and...

Build and develop web applications with Blazor in C#. This book will cover all three types of Blazor – server-side, client-side, and hosted along with other features of the technology. You’ll see that Blazor...

Introduction to HTML and CSS
Create Your Own Website From Scratch

Get started on the basics of creating websites with HTML and CSS. Relying on only the most up-to-date techniques, this video course provides a way for you to quickly begin coding basic websites on your own.

Discover everything you need to know to get up-to-speed with JavaScript development and add dynamic enhancements to web pages. This completely updated third edition reveals how the code works and when to use...

Hi. Welcome to this video about Blazor components. I am Peter Himschoot, and I live in Belgium. And I work as a consultant and trainer for U2U, a Brussels-based training facility specializing in .NET and web development.

I am also the author of Blazor Revealed by E-Press. Blazor Revealed walks you through building your first complete Blazor app looking at all the different things Blazor has to offer to build state of the art single-page applications with Blazor. Let’s see what you will learn in this video.

We’ll start with what is a Blazor component, and then we’ll just dive in and create a new Blazor component. After we’ve done that, we’re going to look at how Blazor components can communicate with one another. We’ll look at parent to child communication. So how can we parse data from a parent and child? But also child to parent communication, how can the child tell the parent that something interesting has happened?

So what is a Blazor component? Blazor apps are built by creating components, which can then be assembled into bigger components. Components are usable, self-contained elements with the user interface, such as page, a dialogue or a form. This user interface is built by combining HTML elements and data, which comes from logic written in .NET, which reacts to the events caused by the user interaction with the component. Components are sharable, can be nested in other components, and can be used among projects as component libraries.