Discover how to create a data merge in easy steps and avoid making basic mistakes using this video. You will take each section step by step to gradually advance your skill level. First, you’ll learn how to do a single page data merge that you can send to clients or a print house to be part of a mailer. You’ll easily build your first data merge file and acquire all the skills you need to use for your own projects.

If you have already designed a form letter for a client mailer in Adobe InDesign, you’ll see that you don’t need to convert it to a Microsoft Word document to create a mail merge. Instead it’s easier to use InDesign’s Data Merge panel to save you time and money. Here you’ll use data from a Microsoft Excel spread sheet, turn it into a CSV file, and do your data merge. Through this video, you’ll see how each step is accomplished through sub-menus and dialog boxes in InDesign and Excel.

Students, graphic designers, and corporate administrators who need to create documents for events. You should have some experience in basic layout in InDesign. 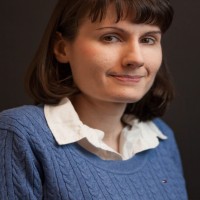 Jennifer Harder has worked in the graphic design industry for over ten years. She enjoys talking about and teaching Adobe Software at Langara. Her interests include: writing, illustration, and working on her websites.

Hello there. My name is Jennifer Harder, and I’m a continuing studies instructor in computer technology at a college in Vancouver, BC, Canada. And I’m also an author for Apress and have written three books with them on the topics of Adobe Creative Cloud software.

Welcome to the video Beginning Data Merge with Adobe InDesign CC. Through its parts and segments, you will be exploring what InDesign data merge is and how to use it for your upcoming projects.

If you have already designed a form letter for a client, a mailer, or communique in Adobe InDesign, you don’t need to convert it to a Microsoft Word document to create a mail merge. Instead, it is easier to use InDesign’s data merge panel to save you time and money. This video, in part one, will cover how to utilize data from a Microsoft Excel file spreadsheet that is turned into a CSV, comma separated values, file also called comma delimited. And it is linked to the Adobe InDesign CC file via the Data Merge panel.

The InDesign document will be a one page form letter that contains a unique address recipient’s name and other personal information fields within the generic text. The linked information fields will be previewed using the Data Merge panel, and you, the viewer, will observe how each step is accomplished via sub-menus and dialog boxes in both InDesign and Excel. The resultant merged InDesign file of letters will then be exported and convert it to a PDF that can later be split using Adobe Acrobat Pro DC for e-mailing to clients or remain as one document that can be sent to your printer and later collated with other documents for the mailer.

Later, you will see how you can use the same CSV to place an address on documents that are the same size as number 10 envelopes or any sized envelope that your local print house recommends. With this foundation information, you will then move on to part two, multiple data merges and how it can be applied to business cards with GREP styles, linked images, or basic QR codes.

If you want to work along with these projects, go to the link below the video to access the project files. If you would like more detailed information on the topic of the data merge, please check out my book Data Merge and Styles for Adobe InDesign CC 2018, which works with the software CC 2018 and the latest versions of InDesign CC.