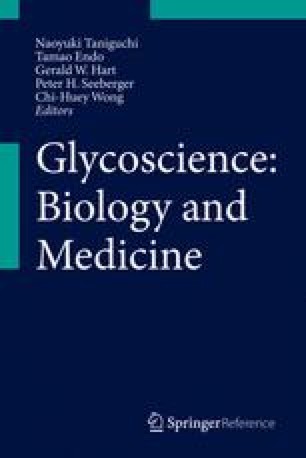 Glycosaminoglycans and Glycosylphosphatidylinositol-Anchor Proteins in Development of Caenorhabditis elegans

Glycosaminoglycans (GAGs) and glycosylphosphatidylinositol (GPI)-anchored proteins play various roles in the development of multicellular organisms. Caenorhabditis elegans is an excellent model organism to study the role of glycoconjugates in development and morphogenesis because genetically identical organisms are easy to collect in large numbers, and the knowledge of its genomic sequence enables quick and effective gene knockout or knockdown analysis. RNA interference (RNAi), deletion mutagenesis, and the recently developed genome-editing techniques can be easily applied to this model organism. Genetic and biochemical analysis are relatively simple, and owing to C. elegans’ transparent body, cell lineage analysis can be carried out easily. The presence of GPI-anchored proteins (GPI-APs) and GAGs has previously been established in this model organism, and the major genes responsible for their synthesis have been identified. Functional inhibition of these genes revealed that GPI-APs and GAGs play essential roles in germline formation, early embryonic cell division, early morphogenesis, and in the development of the nervous system.

There are over 20,000 protein-coding genes in the nematode Caenorhabditis elegans, and more than 60 % of these are human gene orthologs if kinase genes whose true substrates in the nematode are unknown are counted. Cell lineage of C. elegans and the neuronal connectome for both hermaphrodites and males are completely characterized, and they do not vary between animals. The body of the nematode is transparent, which means that development can easily be traced in vivo. Therefore, any abnormalities resulting from the inhibition of glycogene function can be visualized using this model organism. Inhibition of gene functions using RNAi is a quick and easy technique, and gene KO animals and various alleles are strategically collected and shared worldwide in the research community. Various genome-editing techniques including the CRISPR-Cas9 system are also widely used. This chapter, after a brief introduction to the biology of C. elegans, provides a summary of the roles of GPI-anchored proteins (GPI-Aps) and glycosaminoglycans (GAGs) in C. elegans.

The C. elegans gonad originates from four cells (Z1, Z2, Z3, and Z4), which are found in L1 larva. The Z2 and Z3 cells are equivalent germline precursor cells, which divide and differentiate into sperm and oocytes. These cells are flanked by Z1 and Z4 cells, which are equivalent somatic gonad precursor cells, and divide and differentiate into distal tip cells (DTCs), gonadal sheath cells, the spermatheca, and the uterus. The differentiated gonad is in the form of a U-shaped tube. At each distal end of the tube, there is a DTC, a somatic gonad cell, which plays an essential role in germline formation. Two DTCs differentiate in the L2 larva, and their active migration at each distal end of the future gonad leads the U-shaped gonad formation. Disturbance of DTC migration results in the malformation of the U-shaped gonad as observed in various mig (abnormal cell migration) mutant alleles. Once the development of the U-shaped gonad is complete, the DTC covers each distal end with long external processes (six to eight germline stem cells wide) and secretes LAG-2 Notch ligands. These ligands bind to the GLP-1 Notch receptor on germline stem cells. The resulting Notch signaling keeps the germline stem cells from entering meiosis and maintains the stem cell niche. DTCs appear to play a similar role in Drosophila cap cells and hub cells in germline formation and maintenance of the germline stem cell niche. With a decrease in Notch signaling, the germline stem cells cease mitosis and enter into meiosis to form sperm and oocytes (Schedl 2013).

In C. elegans, germline cell cycle progression can be monitored in vivo because of the animal’s transparent body (Fig. 1). This means that processes such as spermatogenesis, oogenesis, the first meiotic division, fertilization, secretion of cortical granules, and the second meiotic division can easily be visualized with a DIC (differential interference contrast) microscope. Early embryogenesis can be monitored using computer-controlled time-lapse microscopy. Various transgenic lines expressing fluorescent proteins are used extensively to monitor development and morphogenesis, including neuronal cell wiring formation. Abnormalities in processes such as germline formation, embryogenesis, morphogenesis, neurogenesis, and life span due to the inhibition of any gene can also be detected easily. Therefore, C. elegans is one of the best model organisms to study the roles of glycogenes, and other genes, in development, morphogenesis, and in any other biological process.

Several predictions of GPI-AP genes in the C. elegans genome have been carried out and are provided in several online resources. In one prediction, 147 different GPI-AP candidates (highly probable genes) are listed. GPI-APs are usually stained with fluorochrome-labeled proaerolysin, which is a fluorescently labeled toxin precursor protein derived from Aeromonas hydrophila that specifically binds GPI-APs. Using this staining, C. elegans GPI-APs were found to be distributed on DTCs, somatic gonadal sheath cells, oocytes, sperm, muscle cells, neurons, coelomocytes, and other cells (Murata et al. 2012). Biochemically, GPI-APs have been identified by two-phase partitioning of membrane proteins with Triton-X114/water followed by digestion of GPI-APs in the detergent phase using phosphatidylinositol-specific phospholipase C (PI-PLC). The digested GPI-APs are concentrated in the water phase in the second Triton X114/water separation, and the proteins in the water phase are subsequently separated by SDS polyacrylamide gel electrophoresis. The separated protein bands are excised and sequenced by mass spectroscopy. One example of a GPI-AP identified by this method is the protein WRK-1. This protein is orthologous to the Drosophila immunoglobulin superfamily of proteins, including WRAPPER and KLINGON. It plays an essential role in motor neurons and other specific neurons. In addition, WRK-1 is expressed in the intestine, socket cells, sheath cells, coelomocytes, excretory gland cells, and DTCs.

In higher organisms, including humans, the anchor portion of the GPI-APs is synthesized by the sequential functioning of more than 29 different genes. PSI-BLAST searches with the human gene sequences identified more than 24 orthologs of these genes in the C. elegans genome while no orthologs for PIGH, PIGY, PIGL, PIGF, or DPM2 were identified (Murata et al. 2012). Although the molecular structure of the anchor portion of GPI-APs has not been reported, the presence of a similar backbone structure of the GPI anchor is presumed from the conserved GPI synthesis genes.

RNAi-mediated inhibition or knockout of several of these orthologous genes results in germline formation abnormalities in C. elegans. For instance, the PIGA gene encodes the catalytic subunit A of phosphatidylinositol N-acetylglucosaminyltransferase (GlcNAc-PI synthesis protein), which is involved in the first step of GPI-anchor structure synthesis. The ortholog of the human PIGA in C. elegans is piga-1. The knockout of piga-1 disrupts GPI-AP synthesis, and no GPI-APs are found on the cell surface of the KO strain. In the GPI-AP-deficient animals, germline formation is severely affected and the strain is sterile. In addition, oocyte formation is abnormal, and no fertilized eggs are formed. RNAi of other genes involved in GPI-anchor synthesis also results in abnormal germline phenotypes, indicating the indispensable role of GPI-anchor synthesis in germline formation. Thus, without GPI-AP synthesis, no offspring would be expected (Murata et al. 2012).

GPI-APs are found in the detergent-insoluble fraction of the C. elegans membranes, and several have been identified in the lipid raft fraction. Previous studies have shown that PI-PLC treatment affects sperm activation in C. elegans, indicating that GPI-APs are essential in fertilization (Dou et al. 2012). As described earlier, GPI-APs also play an essential role in nervous tissue development in C. elegans. RIG-6, the sole ortholog of mammalian contactins, is a GPI-AP that plays a role in the tubular elongation of excretory cells and in axon guidance (Katidou et al. 2013). In conclusion, more and more essential roles of GPI-APs in C. elegans have been found in this model organism, and the studies on the roles of individual GPI-APs will shed new light on the nature of GPI-APs in higher organisms including humans.

Chondroitin synthesis is essential for the early embryonic cell division of C. elegans (Fig. 2b). Without chondroitin synthesis, no cytokinesis occurs resulting in multinucleated embryo formation, which is lethal. Chondroitin in C. elegans is not sulfated although the possibility of a small amount of chondroitin sulfate has recently been discussed. There are two genes involved in the synthesis of chondroitin: sqv-5 and mig-22 (Mizuguchi et al. 2003). SQV-5 is a chondroitin synthase and MIG-22 is the chondroitin polymerizing factor. “SQV” refers to the phenotype of “squashed vulva.” The vulva in C. elegans, sometimes referred to as “the smallest organ in the world,” is the passageway connecting the uterus to the exterior. Fertilized eggs are laid through the slit of the vulva. Extensive screening of mutants exhibiting squashed vulva (sqv) phenotypes was carried out, and eight sqv genes (sqv-1 to sqv-8) were identified. Inhibition of either sqv-5 or mig-22 results in an embryonic lethal phenotype due to abnormal cytokinesis. Retraction of the cleavage furrow in early cleaving eggs was commonly observed in sqv-5 (or mig-22) RNAi-treated animals and loss of either gene resulted in abnormal cytokinesis followed by multinucleated egg formation. Cell division consists of both nuclear and cytoplasmic division (cytokinesis), and the synthesis of chondroitin is vital for normal cytokinesis. Nine genes coding C. elegans chondroitin proteoglycans have been identified (cpg-1 to cpg-9) (Olson et al. 2006). Simultaneous inhibition of cpg-1 and cpg-2 results in abnormal cytokinesis followed by lethality as seen in the SQV-5- and MIG-22-deficient animals. CPG-1 and CPG-2 are present in cortical granules, the marker of which is the protein caveolin, and they move to the embryonic cell surface before the first cleavage occurs. RAB-11 is involved in this process, and the presence of separase has been reported in the cortical granule vesicles as well as in the cleavage furrow region (Sato et al. 2008). No orthologs of these cpg genes have been found outside the nematode phylum. In mouse embryos, inhibition of the synthesis of the linkage region of proteoglycans, by gene KO of glucuronyltransferase-I (GlcAT-I), results in similar cytokinesis defects. This suggests that chondroitin has a similar role in the cytokinesis of higher organisms (Izumikawa et al. 2010).

Heparan sulfate (HS) proteoglycans are also present in C. elegans. HS consists of approximately 0.2 % of chondroitin, and its synthesis is mediated by two genes, rib-1 and rib-2 (Kitagawa et al. 2007). rib-1 is an ortholog of human EXT1, and rib-2 is an ortholog of human EXTL3. Polymerization of the heparan sulfate chain in C. elegans is achieved by the RIB-1/RIB-2 complex. Knockout of either rib-1 or rib-2 results in abnormalities in the later stages of embryogenesis and development. Epithelial morphogenesis of post-gastrulation stage embryos (closure of ventral cleft) is severely affected in rib-1 (or rib-2) KO animals. Ventral enclosure is also abnormal and many eggs fail to develop normally. In addition, all KO animals die before larval stage L1. When either of the two genes is knocked out, early embryonic cells cleave normally, and no abnormal phenotypes in early cleavage were found. In some escapee animals, the formation of the neural connection is affected, especially in the nervous cells called hermaphrodite-specific neurons (HSN). These phenotypes are very similar to those found in animals with defective sulfation due to the inhibition of PAPS synthase/PAPS transporter genes or of tyrosine sulfation genes. PAPS (3′-phosphoadenosine 5′-phosphosulfate) is an activated sulfate molecule that acts as a sulfate donor during the sulfation process. Abnormal neural connection phenotypes are similar to those found in RNAi-treated/KOs of heparan sulfate epimerase or HS-specific sulfotransferase. The HS proteoglycans found in C. elegans are glypican (gpn-1, lon-2), syndecan (sdn-1), perlecan (unc-52), agrin (agr-1), and collagen XVIII (cle-1).

GPI-APs and GAGs play an essential role in various aspects of the development of C. elegans. Germline development, gonad formation, germline stem cell formation and germline niche maintenance, oocyte formation, meiosis and cortical granule exocytosis, and early embryonic cell division are all examples of different processes in which the glycans play vital roles. They also play a fundamental role in morphogenesis and neurogenesis. The genes involved in the synthesis of GPI-APs and GAGs are essential, and the GPI-AP and GAG proteins themselves are indispensable groups of glycans in C. elegans.