Sergey (Aleksandr) Ambartsumian (∗March 17, 1922, Gyumri, Armenia; †August 4, 2018, Yerevan, Armenia) was one of the founders of the scientific school of mechanics in Armenia and was an internationally recognized scientist who made outstanding contributions to continuum mechanics. His scientific interests spanned anisotropic plates and shells, magnetoelasticity and coupled electro-magneto-mechanical effects of thin structures, elastic solids showing strength-differential effect, micropolar and viscoelastic media, biomechanics, space exploration based on a new space elevator concept, smart material, and nanomaterials. 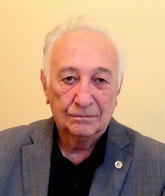 Sergey A. Ambartsumian was born in Aleksandropol (now Gyumri) in Armenia in 1922. He graduated from Yerevan Polytechnic Institute (1942), where he received a candidate degree (PhD) in 1946. He received a degree of Doctor of Technical Sciences from the Institute of Problems of Mechanics of the USSR Academy of Sciences (Moscow) in 1952.

Ambartsumian published about 400 refereed papers in Russian, Armenian, and international peer-reviewed journals, contributed to more than 100 proceedings of domestic and international conferences, and was the author or co-author of 22 monographs or textbooks. He obtained original and fundamental results in continuum mechanics. He suggested a new general theory of anisotropic layered shells which was published firstly in a the monograph Ambartsumian (1962b, 1964, 1966). One of his most-cited papers (more than 750 citations) is Ambartsumian (1958), where a new higher-order shell theory which takes into account of the transverse shears has been presented firstly. Ambartsumian generalized his fundamental theoretical and applied results in the field of layered anisotropic plates and shells in several monographs published in USSR, Armenia, the USA, China, Singapore, and Japan (Ambartsumian, 1967, 1971). In addition, he wrote some literature surveys (Ambartsumian, 1962a). He is the author of the multimodular theory of elasticity (Ambartsumian, 1982). Together with his colleague A.A. Khachatryan, he proposed a mathematical justification for this theory and developed effective solution methods for beams, rods, plates, and shells made of material showing the strength-differential effect w.r.t. stretching and compression. This theory was generalized in monograph and translated and published in China. Ambartsumian and his colleagues G.E. Bagdasaryan and M.V. Belubekyan developed the general theory of electro-magneto-elasticity of thin plates and shells (Ambartsumian et al., 1977). This theory was applied to describe the dynamic behavior and coupled effects of elastic electroconductive, current-carrying, or ferromagnetic thin structure under action of external magnetic field. Numerous results were summarized in many papers and in four books. Ambartsumian together with M.V. Belubekyan created an original micropolar theory of films and plates, which combines his refined theory of anisotropic shells and plates with the classical nonsymmetric theory of elasticity. The results were summarized in Ambartsumian and Belubekyan (2016).

Ambartsumian supervised a number of young researchers as PhD students or as postdoctoral researchers. Among these researchers are academicians G. Bagdasaryan and L. Agalovyan and professors S. Durgaryan, V. Gnuni, and R. Kirakosyan who in different years headed the Institute of Mechanics and science departments of the Institute of Mechanics in Armenia. He established many long-term fruitful and friendly scientific collaborations, especially with prominent scientists of the former Soviet Union (Russia, Georgia, Ukraine, Latvia) and USA.