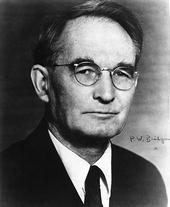 Percy Williams Bridgman was born as the child of Raymond Landon Bridgman, a newspaper reporter, and Mary Ann Maria Williams. He attended the primary and the high school in Auburndale, one of 13 villages within the city of Newton (close to Cambridge). Since 1900 he studied physics at Harvard University.

In 1905 he started his research on the influence of high pressure on materials and their thermodynamic behavior. Observing a malfunction of his pressure apparatus, he changed the design, and as a result, he could realize pressure higher than 10 GPa (up to this moment, the limit was 0.3 GPa). With this new...