George Biddell Airy Airy Stress Function Method Royal Grammar School Royal Prussian Academy American National Academy
These keywords were added by machine and not by the authors. This process is experimental and the keywords may be updated as the learning algorithm improves.
George Biddell Airy (∗July 27, 1801, in Alnwick, Northumberland, England; †January 2, 1892, in Greenwich, England) was an English mathematician, physicist, and astronomer.
Open image in new window 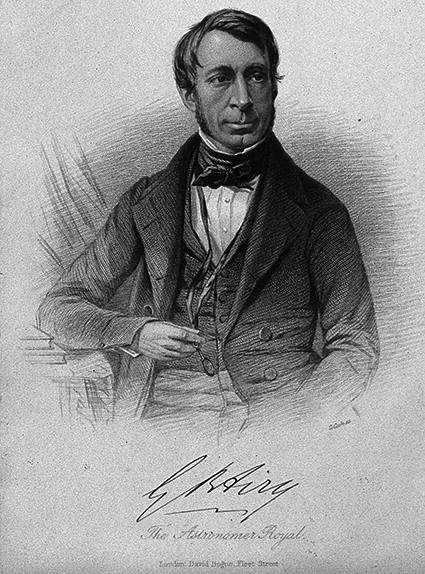 After elementary school in Hereford, Airy entered the Royal Grammar School in Colchester. One of his relatives sponsored his school education and inspired him for physics. From 1819 he studied at the Trinity College of the University of Cambridge. He was several times “the best of the year” student and finished in 1823 his studies and obtained the first Smith Prize.

On October 1, 1824, Airy was elected fellow of Trinity and in December 1826 was appointed Lucasian professor of mathematics in succession to Thomas Turton. This chair he held for a little more than a year, being elected in February 1828 Plumian professor of astronomy and director of the new Cambridge Observatory. In June 1835, Airy was appointed Astronomer Royal in succession to John Pond and began his long career at the national observatory which constitutes his chief title to fame. Airy retired in 1881.

George Biddell Airy had made a lot of contributions to astronomy, optics, and mathematics (with applications to mechanics). Among them are In 1851, Airy established a new Prime Meridian at Greenwich. This line, the fourth “Greenwich Meridian,” became the definitive internationally recognized line in 1884. In 1862, Airy presented a new technique to determine the strain and stress field within a beam (called now the Airy stress function method). The method can be used to find solutions to two-dimensional problems in solid mechanics. For example, it was used by Westergaard to determine the stress and strain field around a crack tip. The method is widely used in fracture mechanics.