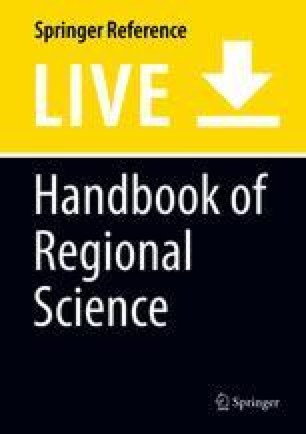 This chapter presents and critically evaluates the economic assumptions and applicability of a series of regional and interregional interindustry models. It begins with the demand-driven, single-region Leontief quantity model and its cost-push price dual. Then Sect. 4 discusses the ideal, full information, interregional input-output model with interregional spillover and feedback effects at length, and compares it with the requirements and assumptions of more limited information, multi-regional input-output models. Section 5 discusses how to construct and add an interregional consumption function to obtain the Type II interregional interindustry model. Section 6 outlines further extensions, all through to the most complex price-quantity interacting interregional demo-economic model LINE. Finally, an Appendix presents a micro-economic foundation for the Leontief model, and compares it with the alternative supply-driven quantity model and its demand-pull price dual.

The authors thank the editors, Piet Rietveld and Manfred Fischer, and Dirk Stelder for useful comments.

Appendix: The Micro-economic Foundation of the Leontief and the Ghosh IO Model

The basic Leontief quantity and price model for a closed economy, introduced in Sects. 2 and 3, may be derived from micro-economics by assuming that all firms in each industry sell that industry’s single homogeneous output under full competition, while they minimize their cost at given prices under a Walras-Leontief production function:
$$ {x}_j=\min \left({z}_{ij}/{a}_{ij},\forall i;{v}_{pj}/{c}_{pj},\forall p\right). $$
(A.1)
This results in a perfectly elastic supply of that single homogeneous output, and a perfectly inelastic demand for intermediate and primary inputs, zij and cpj, under fixed input ratios, aij and cpj. Consequently, any change in the exogenous primary input prices is entirely and precisely passed on to all intermediate and final markets for the output of that firm. The left hand side of Fig. A.1 summarizes these individual firm assumptions, and adds the assumptions about what is determined exogenously and what follows endogenously for the economy as a whole.

The left hand side of Fig. A.2 shows the implications of the above assumptions for the working of, for example, an individual intermediate input market. The vertical demand for these inputs is determined by the Leontief quantity model, whereas the horizontal supply of these inputs is determined by the Leontief price model. Any change in the demand of the purchasers is matched exactly by a corresponding change in its supply, without any change in the price asked by the suppliers. Hence, demand drives the quantity model. On the other side of the market, any change in the price asked by the suppliers is accepted by its purchasers, without any effect on their demand for this input. Hence, costs push the price model. Clearly, in the short run, this is not a realistic model unless there is excess capacity on all relevant primary input markets, whereas, in the long run, this model is only realistic if the relative prices of the primary inputs do not change.

The obvious follow up question is whether the alternative IO quantity model of Ghosh (1951) combined with its dual price model (Oosterhaven 1996), offers a more plausible alternative. Ghosh developed his alternative IO model for the essentially centrally planned Indian economy of that time. Here we interpret the Ghosh model as a model for a market economy. As such it represents the opposite of the Leontief model, as can be seen by comparing the right and left hand side of Figs. A.1 and A.2. An alternative interpretation in which the Ghosh model is not the opposite of the Leontief model is presented by deMesnard (2009). His point of departure is a physical IO table that has homogenous outputs along its rows and heterogenous inputs along its columns. With this asymmetric assumption naturally only asymmetric results can be derived. In reality, however, even tons of steel, a seemingly homogeneous output, have different qualities and different prices and cannot be simply added in physical units. In the real world any IO table will have heterogeneous outputs along its rows as well as heterogenous inputs along its columns. This later type of IO table is our point of departure.

In the Ghosh quantity model the homogeneity assumption is made for all inputs along the columns of the IOT, instead of for all outputs along the rows of the IOT, as in the Leontief model. This implies that all inputs are perfect substitutes for each other. Hence, factories may run without labor, and cars may run without gasoline. Next, the Ghosh model assumes perfect complementarity of the outputs along the rows of the IO table, which is technically plausible for chemical industries, but which has to be based a marketing desire to service all markets with the same constant market share for other industries. This is only possible if this supply of outputs is confronted with a perfectly elastic demand for them. Hence supply drives the Ghosh quantity model. See the right hand side of Fig. A.1 for the remaining assumptions.

The mathematics of the Ghosh quantity model is far simpler than its economics, if only because it is the pure opposite of the Leontief model. It’s solution reads as follows (see Oosterhaven 1996, for details):
$$ {\mathbf{x}}^{\prime }={\mathbf{v}}^{\prime}\;{\left(\mathbf{I}-\mathbf{B}\right)}^{-1}={\mathbf{v}}^{\prime}\mathbf{G}\, \mathrm{and}\, {\mathrm{i}}^{\prime}\;\mathbf{Y}={\mathbf{v}}^{\prime}\;\mathbf{G}\ \mathbf{D}, $$
(A.2)
where B denotes the NxN-matrix of intermediate output coefficients, D is the NxQ-matrix of final output coefficients, and G is the so-called Ghosh-inverse. In contrast to the Leontief-inverse, that may be used as a measure of the backward linkages of each sector with its direct and indirect suppliers along the columns of the IOT, the Ghosh-inverse provides an indication of each sector’s direct and indirect forward linkages with its customers, along the rows of the IOT. When used to measure forward linkages, in causal terms the Ghosh model is best interpreted as an cost-push IO price model measured in values, instead of in prices as in Sect. 3 (see Dietzenbacher 1997).
The price version of the Ghosh model, which is called the demand-pull IO price model, is the pure opposite of the Leontief price model. It’s solution reads as (see Oosterhaven 1996, for details):
$$ \mathbf{p}={\left(\mathbf{I}-\mathbf{B}\right)}^{-1}\;\mathbf{D}\ {\mathbf{p}}_y=\mathbf{G}\ \mathbf{D}\ {\mathbf{p}}_y, $$
(A.3)
where py is the Q-vector of (index) prices for total final use per category. As opposed to the cost-push model where p refers to the price for each sector’s single homogeneous output, p in Eq. (A.3) relates to the price for each industry’s single homogeneous input. Furthermore, as opposed to the cost-push model, where primary input was homogeneous across the rows, here final use is homogeneous across each column of the IO table. This assumption implies that not only firms, but also consumers may drive cars without gasoline and run home appliances without electricity. See Fig. A.1 for the remaining assumptions.

Finally, each IO market in the Ghosh model thus functions as in the right hand side of Fig. A.2. Prices and quantities move independently. Demand is perfectly price elastic. This means that there is infinite demand at the going market price, which is a good description of the functioning of the butter mountains and the milk lakes of the old common agricultural policy of the EU. Supply, on the other hand, is perfectly inelastic to price changes. Clearly, the Ghosh model does not offer a plausible alternative to the Leontief model, but studying it does enlarge our understanding of the nature of the Leontief model.