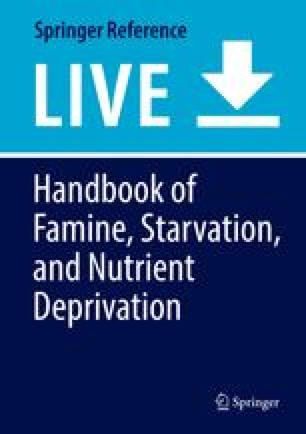 Handbook of Famine, Starvation, and Nutrient Deprivation pp 1-8 | Cite as

There is no greater major threat to public health worldwide than nutrient deprivation. Presently nutrient deficiency affects around 800 million people worldwide. Since time immemorial nutrient deprivation or overt starvation has caused organ dysfunction or death. Nutrient deficiency is not only the consequence of drought, famines, or civil upheaval. Malnutrition may arise for a number of reasons. For example, some studies have reported that in hospitals as many as half of patients may be malnourished or at risk of malnutrition. The term malnutrition however is very broad and covers undernutrition, imbalance, and overnutrition. This book focuses on the former two umbrellas and coverage ranges from cellular events to public health policies. The detailed molecular events arising from nutrient deprivation are relatively recent discoveries in the overall time scale of research into malnutrition. At the other end of the spectrum, public health policies are constantly being updated to take into account prevailing social, geographical, political, and economic profiles of communities and countries. Within this are policies which encompass future trajectories which aim to prevent famines or undernutrition. Thus there is a complex continuum of knowledge that stretches from our understanding of how molecules in cells behave to the imposition of policies. To further aid colleagues in the acquisition of this knowledge, this chapter lists the resources on the regulatory and professional bodies, journals, books, and websites that are relevant to an evidence-based approach to famine, starvation, and nutrient deficiency, from cells to policy.

Nutrient deprivation is a major threat to global public health. Starvation is the most extreme nutrient deprivation. It results from severe restriction of dietary energy and macro- and micronutrient intake below that needed to sustain life. Accurate data on the extent of starvation is relatively difficult to obtain. However, less severe nutrient deficiency affects around 815 million people on a global basis (Food and Agriculture Organization of the United Nations et al. 2017).

Famine has caused starvation and nutrient deprivation in humans since time immemorial. However, the understanding of the molecular changes relevant to the effects of worsening nutrient deprivation is relatively recent discoveries in the overall time scale of research in this field. It is important to remember that nutrient deprivation arises in a number of scenarios other than due to famine per se. These include undernutrition due to illness, poverty, societal imbalance, conflict, self-starvation, and so on. Nutrient deprivation is under-recognized in modern medicine and to some extent does not receive the attention it deserves. For example, over 20 years ago, Powell Tuck (1997) highlighted that the prevalence of malnutrition in hospital patients is between 19 and 55% using various criteria. Despite this, undernutrition in the hospital setting still remains problematic (Kruizenga et al. 2016; Morris et al. 2018).

The treatment of starvation and nutrient deprivation may seem obvious and straightforward. However, the relatively recent discovery of the phenomenon known as the refeeding syndrome underlines the importance of gradual replacement of the calorie deficit (Friedli et al. 2017). Yet although refeeding syndrome was described more than 70 years ago, there is still no standard definition or recommendations for its prevention or treatment (Friedli et al. 2017).

Regardless there has recently been an explosion in the knowledge and understanding of nutrient deprivation and starvation. It is now difficult even for experienced scientists to remain up-to-date. To assist colleagues who are interested in understanding more about this field, we have therefore produced tables containing up-to-date resources in this chapter. The expert who assisted with the compilation of these tables of resources is acknowledged below.

Tables 1, 2, 3, and 4 list the most up-to-date information on the regulatory bodies and professional societies (Table 1), journals on nutrient deprivation (Table 2), books (Table 3), and online resources (Table 4) that are relevant to an evidence-based approach to nutrient deprivation.
Table 1

Journals publishing original research and review articles related to nutrient deprivation, famine, or starvation. We list the top 20 journals which have published the most number of articles over the past 5 years. Although we used Scopus to generate this list, other databases or the use of refined search terms will produce different results

This table lists some internet resources relevant to nutrient deprivation, famine, or starvation. Sites listed in Table 1 may also have tools or resources within them. For example, the NIH listed in Table 1 will have information on dietary reference intakes (DRIs), nutrition in cancer care, screening tools, and so on within the domain of its websites

We would like to thank the following author for contributing to the development of this resource. Dr Valeria Galetti.