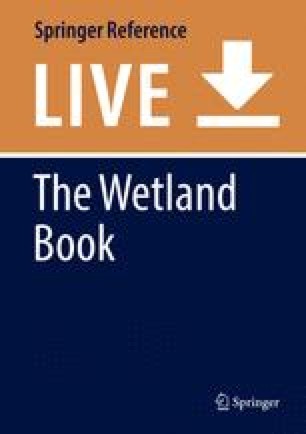 Remote Sensing of Water in Wetlands: Inundation Patterns and Extent

Seasonally varying inundation extent and duration are key properties of wetlands, but are poorly quantified, particularly in tropical, boreal, and coastal regions. Optical sensors such as Landsat are limited by cloud cover, although sensors such as MODIS, with high repeat frequency, partly compensate for this limitation. Synthetic aperture radar (SAR) sensors are insensitive to cloud cover, and at longer wavelengths (C-band and L-band) are capable of detecting water beneath vegetation canopies. Time series of SAR data are effective for monitoring seasonal inundation dynamics, and combinations of different SAR wavelengths and polarizations can discriminate vegetation structure. Optical, SAR, and passive microwave sensors are being employed at global scale to characterize the role of wetlands in global hydrologic and biogeochemical cycles.

Inundation , whether permanent or temporary, influences biogeochemical cycles, trace gas fluxes between land and atmosphere, nutrient uptake, and sediment amounts and redistribution, and determines the types, extent, and condition of aquatic vegetation (Alsdorf et al. 2007; Frappart et al. 2005). Inundated areas may be connected to or isolated from the main river channels (Ward et al. 2013; e.g., those that are rainfed or remain following water recession). The levels, depths, and movements of water depend largely on the nature of the elevation, slope, and morphology of the terrain (Alsdorf et al. 2000).

Despite their importance, timely and accurate information on inundation is not available for many regions. As illustration, across much of Africa, the hydrologic dynamics of seasonally flooded wetlands and floodplains remains poorly quantified (Lee et al. 2011) despite these occupying over 1 million km2 and contributing to the livelihoods of millions of people. Equally, in northern latitudes, the extent and dynamics of wetlands are not well known (Whitcomb et al. 2009) and large gaps exist in relation to wetland surface elevation changes in tidally inundated coastal wetlands (e.g., saltmarshes and mangroves; Webb et al. 2013). Monitoring of inundation may also be compromised by urbanization of proximal environments, as in the case of temperate peatlands (Andersen et al. 2011).

Methods for Detecting and Mapping Inundation

For detecting, mapping, and monitoring inundation, a wide range of methods have been developed using a diverse range of sensors. Landsat sensors at moderate (<30 m) spatial resolution have frequently been used for large scale mapping of the extent of open water but the dynamics are often not captured because of the 16-day repeat frequency, which is further reduced when cloud cover occurs; water beneath vegetation (particularly dense vegetation) is also difficult to detect (Smith 1997; Alsdorf et al. 2000; Vanderbilt et al. 2002). Greater success in mapping inundation extending over large areas has been achieved using lower resolution optical sensors, such as MODIS, which provide imagery on at least a daily basis and at a global level although the time-series may still be compromised by image quality (hence composite images are often used). The relatively coarse (>250 m–1 km) spatial resolution limits detail in the delineation of open water, although several studies have used a suite of complementary satellite measurements to estimate the fractional extent of inundation (Prigent et al. 2007). Inundation extent is also often underestimated with detection depending upon the reflectance of the background and also the depth of water. Methods for mapping inundation from optical data have typically been based on density slicing (e.g., Shaikh et al. 2001) or classification (e.g., Rebelo et al. 2009) of single or combinations of bands and/or derived indices (e.g., the modified Normalized Difference Water Index or Open Water Likelihood Algorithm) (Chen et al. 2013).

Synthetic Aperture Radar (SAR) data have been shown to be useful for mapping and monitoring the extent of both open water and subcanopy inundation at relatively high resolution (100m or better) (e.g. Hess et al. 1990; Hess et al. 1995; Smith 1997; Kasischke and Bourgeau-Chavez 1997; Kasischke et al. 2003; Frappart et al. 2005; Arnesen et al. 2013). Due to its insensitivity to cloud cover, complete SAR coverage can be obtained over continental scales within relatively short time intervals (12–46 day intervals), making it possible to monitor regional scale inundation dynamics (Rosenqvist et al. 2000; De Grandi et al. 2011). The ability of SAR to detect open water is attributable to specular reflectance of the radar waves by the smooth reflecting water surface, resulting in a dark radar image pixel (Telmer and Costa 2007). There can be ambiguity, however, as water can become brighter if it is wind roughened, and ground barren of vegetation can also be quite dark. By carefully selecting the incidence angle range that is used in the analysis, the effect of wind roughening can be reduced; the ability of the SAR to distinguish between open water and bare ground is partially dependent on the Signal to Noise Ratio (SNR) and noise level of the SAR, its wavelength, and its polarization.

Vegetated environments with subcanopy inundation may be identified if the wavelength of the SAR is greater than about 5 cm (C-band). The ability of SAR to detect inundation in the presence of vegetation is attributable to the transmitted microwaves scattering off both the flat open water surface and the vertically emerging vegetation (i.e. a “double bounce” reflection). This results in a large fraction of the transmitted power being reflected directly back to the radar. At wavelengths shorter than 5 cm, unless the vegetation is sparse or the canopy broken, specular or volume scattering from the surface or canopy layer will generally dominate (see Fig. 1 for an illustration of the scattering mechanisms). But as the wavelength increases from 5 cm to 20 cm (L-band) to a meter or more (i.e. P-band), penetration through the vegetation (including woody vegetation) to the underlying water layer is more common, with double bounce reflections becoming the dominant signal in these inundated environments. Despite volume scattering and attenuation of the radar signal by the vegetation canopy, a strong return back to the radar can be received. Figure 2 illustrates the changing dominance of double-bounce reflections with changing wavelength.
As exemplified by Hess et al. (2003), image brightness thresholds may be used to detect inundated vegetation, as the double bounce areas are significantly brighter than areas dominated by specular and volume scattering. However, similar brightness values can occur in urbanized areas (e.g., particularly if streets are orientated parallel to the flight track of the radar) or where the surface is rough (e.g., lava flows). Figure 3 shows an example SAR image from the JAXA ALOS PALSAR instrument and an associated inundation classification. As can be seen, brighter image areas may be associated with inundated vegetation, and darker image areas of may be associated with open water. This image was acquired in a wide-swath imaging mode called “ScanSAR”.
The configuration of the SAR includes the polarization as well as the wavelength. We have assumed a typical polarization configuration of horizontally polarized on transmit and receive (called “HH”), which is optimally sensitive to double bounce reflections. However, a SAR may be capable of acquiring other polarization combinations. Using polarimetric decomposition techniques, a fully polarimetric radar (collecting four orthogonal polarizations) is capable of clearly identifying the scattering mechanism (Cloude and Pottier 1996). Figure 4 shows an example of a multipolarization SAR image for a vegetated environment that is inundated, illustrating the complexity of the scattering behaviors in these types of regions.

There is a particular advantage of using time-series of SAR data, in that they provide the opportunity to understand and quantify the dynamics of inundation across large and often inaccessible areas, with such information providing input to, for example, habitat maps and models or estimates of methane emissions from wetlands.

Interferometric SAR (InSAR) , in which two SAR images are acquired at different times and interfered, may be used to measure small changes (a fraction of a wavelength) in water level between the two observation dates in the presence of double-bounce scattering (e.g. inundated vegetation). This was first demonstrated by Alsdorf et al. (2000). Figure 5 illustrates this sensitivity of a SAR interferogram to slight changes in water level.

Alternative approaches used for detecting inundation have included the use of Light Detection and Ranging (LiDAR) intensity data following enhanced Lee filtering (Lang and McCarty 2009) for local area mapping. Gravity data from the NASA Grace mission were used in combination with satellite altimetry data and other sources to estimate inundation and also the volume of water filling and draining from large wetlands (Alsdorf et al. 2010; Lee et al. 2011). However, these data sets necessitate the masking of nonwetland areas and difficulty arises when detecting inundation under dense forest canopies in tropical regions (Melton et al. 2013). Papa et al. (2006) also highlighted the use of the dual Ku (13.6 GHz) and C (5.4 GHz) frequency radar altimeter on board the Topex-Poseidon satellite for detecting inundation over boreal regions, with monthly flooded areas determined from flooded pixel fractional coverage based on the altimeter C-band magnitude and vegetation effects considered by applying a linear mixing model to the C-Ku backscatter difference. Approaches to mapping inundation extent at a global level have included the use of passive microwave land-surface emissivities (e.g., from the Special Sensor Microwave/Imager or SSM/I) following removal of atmospheric, cloud, and rain contamination with active microwave (ERS-1) scatterometer data (at 5.25 GHz) and/or NOAA AVHRR Normalized Difference Vegetation Index (NDVI) data used in combination to assess vegetation contributions to the passive microwave signal (Prigent et al. 2007).

The remote sensing techniques described here continue to be developed and expanded as new instruments are developed and launched into Earth orbit. As these products are produced, the uncertainties in estimates of inundation extent and dynamics are clarified. In turn, the uncertainties in biogeochemical models, estimates of trace gas fluxes between land and atmosphere, and knowledge of types, extent, and condition of aquatic vegetation and associated habitats may be reduced.