Handbook of Logical Thought in India 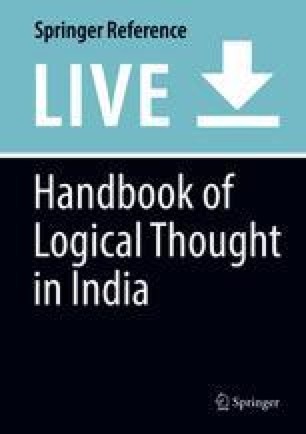 Handbook of Logical Thought in India pp 1-20 | Cite as

In this chapter, three sections from three different texts are chosen which discuss some of the core doctrines in Buddhist logic.

The second section chosen from Dharmakīrti’s Nyāyabindu deals with “Inference for oneself.” Dharmakīrti here tries to construct a comprehensive and tight framework of inference. Accordingly, hetu can be only of three kinds: svabhāva, kārya, and anupalabdhi. Dharmakīrti in this chapter also explains the 11-fold classification of anupalabdhi-hetu.

The third section selected from Dharmakīrti’s Hetubindu discusses formal logical issues concerning the inference for others. Here Dharmakīrti contends that the statements of pakṣadharmatā and vyāpti are the only logically necessary and sufficient premises and that the statements of positive and negative concomitance entail each other such that only one of the two needs to be stated. This gives rise to two basic forms of inference which resemble Modus Ponuns and Modus Tollens.

Negative Concomitance Anupalabdhi Positive Concomitance Provable Properties Apprehensible
These keywords were added by machine and not by the authors. This process is experimental and the keywords may be updated as the learning algorithm improves.
This is a preview of subscription content, log in to check access.