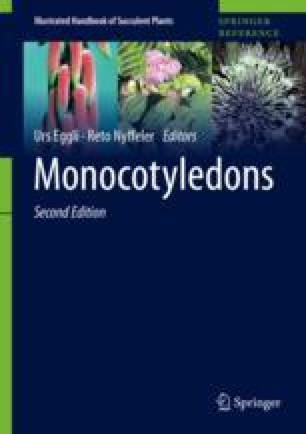 The family is shortly discussed as to the occurrence of succulence amongst its species. None of its species can be classified as succulent. Species with fleshy leaves are halophytic, and species with tubers behave as poikilohydric plants.

A large family consisting of 98 genera and 5680 species, with a worldwide distribution, and especially frequent in water-saturated locations.

The family is not generally known to embrace succulents, although there has been a recent suggestion that Cyperus esculentus (“Yellow Nutsedge”) (widespread in coastal regions of the Mediterranean and the Canary Islands) qualifies as a leaf succulent. The species inhabits dry sand dunes above the high-tide mark, but can also be found further inland at least in S Spain, and these plants sometimes show leaves up to 3–4 mm thick (N. P. Taylor, personal communication 2017). It appears that succulence is, however, merely halophytic, and the plants are not genuinely succulent (T. Raus, personal communication 2017).

Cyperus bulbosus (in the Old World tropics to Australia) and C. esculentus var. sativus (originally W Asia and Africa, now widespread and almost cosmopolitan) produce fleshy tubers derived from a thickened rhizome. The tubers are rich in starch, sugar and fat, and at least the tubers of C. esculentus var. sativus (widely cultivated as “Chufa” in Spain and S America) are poikilohydric rather than succulent, and thus cannot be considered as being succulent according to the definition of succulence of Eggli & Nyffeler (2009). Subterranean tubers are also found in a couple of other species, e.g., C. rotundus (“Purple Nutsedge”, the world’s worst weed) (Goetghebeur 1998).