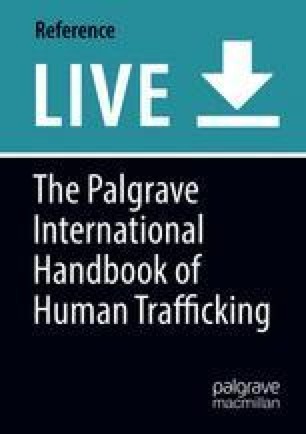 Combatting Trafficking in Human Beings: A Step on the Road to Global Justice?

Trafficking human beings has drawn a great deal of attention and responses at levels from the local to the global. While the massive human rights abuses involved doubtlessly justify the proliferation of well-meant activity as a step toward achieving global justice, a critical look at the structures and methods for delivery reveals other objectives being pursued. When one compares the aspirational statements attached to anti-trafficking activity with the results achieved, skepticism as to the kind of justice being attained or the power channels created can arise. Seen cynically, these examples demonstrate on the one hand a selfish utilization of victims with no genuine interest in their well-being and the establishment of postcolonial power structures by powerful nations on the other.

This exploration does not seek to diminish the very considerable efforts being made to assist THB victims or their importance; instead, it seeks to highlight how efforts on national levels may be falling short of achieving justice for victims even when this is the declared goal of international agreements signed up for. Furthermore, anti-trafficking measures and activities are examined with reference to the notion of justice at the global level; pursuing the question of whether justice of some kind is indeed being pursued. The danger of postcolonial “governing through crime” by more powerful nations as they extend their criminal justice reach into weaker nations – even under this banner – is also explored.

“I believe the trafficking of persons, particularly women and children, for forced and exploitative labour, including for sexual exploitation, is one of the most egregious violations of human rights that the United Nations now confronts. It is widespread and growing… The fate of these most vulnerable people in our world is an affront to human dignity and a challenge to every State, every people and every community. I, therefore, urge the Member States to ratify not only the United Nations Convention against Transnational Organized Crime but also the Protocol to Prevent, Suppress and Punish Trafficking in Persons, Especially Women and Children, which can make a real difference in the struggle to eliminate this reprehensible trade in human beings.” Kofi Annan – Foreword to UNTOC

“And so our message today, to them, is to the millions around the world – we see you. We hear you. We insist on your dignity. Our fight against human trafficking is one of the great human rights causes of our time, and the United States will continue to lead it.” Barack Obama (2012)