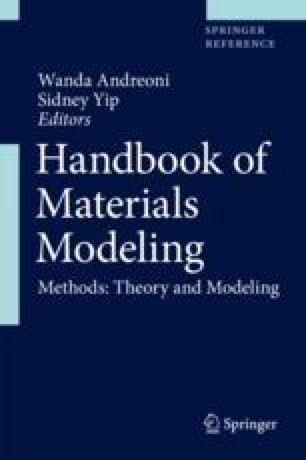 Object kinetic Monte Carlo (OKMC) approaches allow one to explicitly coarse grain atomic processes to simulate the evolution with time of the system/microstructure. This class of methods is quite versatile and can be used to model different processes where the motion of atoms in a given microstructure and their interaction with sinks and traps of the microstructure lead to changes such as phase transition or modification. In this chapter, the method is presented as applied to radiation damage modeling. Along with a description of the technique, we discuss the different pathways possible to couple OKMC with smaller- as well as larger-scale methods and conclude with a brief enumeration of what we believe are the issues for future development.

We now very briefly describe some of the codes developed and used for radiation damage studies in metals.

The event kinetic Monte Carlo code JERK was one of the pioneering codes developed at CEA by Lanore (1974). In this approach the lattice is ignored, and the objects have continuous coordinates. The elementary events are binary encounters of two objects, emissions of a mobile object from a source such as a cluster or a surface. Probability laws are defined for each event. A typical simulation step consists of following the evolution of the object population over a macroscopic time interval. This is achieved by building the list of all possible events which may happen within the time interval, processing the events in the order of increasing delays and refreshing the event list after each event has been processed. When the event list is exhausted, the partners that did not react are displaced according to macroscopic diffusion laws (Barbu et al. 2005). This code has been used to model isochronal annealing in Fe (Mason et al. 2014) and FeC (Jourdan et al. 2011).

The kinetic Monte-Carlo code BIGMAC was developed at Lawrence Livermore National Laboratory by Johnson in collaboration with Caturla and Díaz de la Rubia (Johnson et al. 1998). This code has been used by different research groups to study many systems. BIGMAC tracks the locations of defects, impurities, and clusters as a function of time without relying on a lattice structure (it is however possible to modify the code to include a lattice if necessary). In addition, no hardwired reactions are introduced in the code, thereby allowing the user to directly define any type of system: this versatility allows the study of complex systems. The disadvantage of this approach appears for very high doses, where large defect clusters are formed, since it requires large memory to store the matrices for all defect reactions.

One key feature of BIGMAC is the recent implementation of the cellular approach (Caturla et al. 2016): the simulation box is divided into smaller boxes (cells) with different Cr content. The alloying element is thus treated in terms of average local concentrations, which are given (in atomic %) for each cell. Another peculiarity of the code consists in the fact that jump probabilities for the defects depend on the local solute concentration, as well as on the concentrations of neighboring cells. The cellular OKMC is a priori the ideal framework to introduce explicitly the dependence on local concentration of parameters that describe stability and mobility of point defects and their clusters, making its application to concentrated alloys such as high-Cr F/M alloys ideal.

LAKIMOCA code is a KMC as well as a Metropolis Monte Carlo package developed in standard C by Domain at EDF R&D in 1998. It has been extensively described in Domain et al. (2004). LAKIMOCA can take into account a large number of objects (defect clusters, solute atoms, vacancy-solute clusters, grain boundaries, dislocations, etc.) and exists in two versions: atomistic kinetic Monte Carlo (AKMC) or object kinetic Monte Carlo (OKMC), according to the nature of the object considered as mobile. The code allows easy introduction of different classes of immobile traps (mimicking trapping nano-features, as well as dislocations) and sinks (i.e., features like dislocations and grain boundaries where point defects and clusters can disappear), characterized by specific geometrical shapes (spheres, infinite cylinders, surfaces, etc.). The mobile objects (or more precisely their center of mass) are located on a lattice that can be bcc, fcc, and hcp and can jump from one lattice site to a first neighbor lattice site. The starting configuration can be created by the code itself with random distributions of initial defects and/or solute atoms or can be given by the user. LAKIMOCA can simulate damage production from electron, ion, and neutron irradiation. Neutron irradiation is simulated by a mixed flux of Frenkel pairs and defect cascade debris.

MMonCa is an open-source kinetic Monte Carlo simulator developed by Bragado (Martin-Bragado et al. 2013). It is developed in C++ and distributed mainly for Linux (Ubuntu) sytems. MMonCa contains a Lattice KMC module, used mainly for simulation of epitaxy, and an off-lattice Object KMC module, used for simulation of damage irradiation in many materials. The presence of physical defects that diffuse in space implies the need to include diffusion as a transition rate and to define algorithms for space migration and particle interaction. The space is divided in small prismatic elements using a tensor mesh. Space is assumed to be homogeneous (in material, temperature, etc.) inside each small element. Each element obtains its material definition by calling a user-defined procedure that specifies the material structure in the simulation. In this way, very complex shapes containing different materials can be simulated. This approach is of particular interest in the case of concentrated alloys. Furthermore, the cellular OKMC algorithm initially developed in BIGMAC has been introduced in MMonCa, as well.

KSOME is a flexible and lattice based code patterned after the original FORTRAN code ALSOME (Heinisch 1983) developed by Heinisch. Objects of interest include vacancies, SIAs, interstitial impurities, and clusters of these defects. The objects are characterized by their type, size, shape, position, and orientation (Nandipati et al. 2015).

McHERO stands for Monte Carlo simulation of helium-bubble evolution and resolutions (Takahashi et al. 2010). It is based on kinetic Monte Carlo (KMC) techniques to simulate migration and coalescence of He bubbles and interactions with distinct three-dimensional geometric features of the material. The kinetics of bubble migration and coalescence include Brownian motion as well as bias-driven migration, such as in a stress or temperature gradient. The diffusion coefficients of helium bubbles are converted into probabilities of the occurrence of the events. The event is in this case the diffusion of a bubble within a time step δt. The probabilities are then summed up to find the total probability of the events. The total probability is used to normalize the probability of each event.

The hybrid atomistic/object KMC code MATEO is written in C++ and has been developed by Castin at SCK•CEN (Castin et al. 2017). Its OKMC approach is built upon the same philosophy and fundamental hypotheses (in terms of lattice-defect and microstructure description, reproduction of neutron irradiation, etc.) as the LAKIMOCA code, but it has been refined in a model that contains a more explicit description of solute atoms (Castin et al. 2017). Solutes are explicitly introduced in the matrix, in an AKMC fashion, but only single point defects are allowed to interact with them. Point defect clusters still assume the gray matrix. When either a single vacancy or a single SIA catches a solute atom (found within its radius of interaction), the solute atom is removed from the matrix and incorporated into the object, which is then redefined into a new one. Finally, the solutes are reintroduced in the atomic matrix when the carrying point defect interacts with another object, i.e., either during a recombination event with an opposite kind of defect or merging with another defect of the same kind. Globally, solute transport is thus implemented in a way, which can be regarded as a compromise between providing atomistic-level description and keeping the evolution of the predicted microstructure from the gray alloy model.