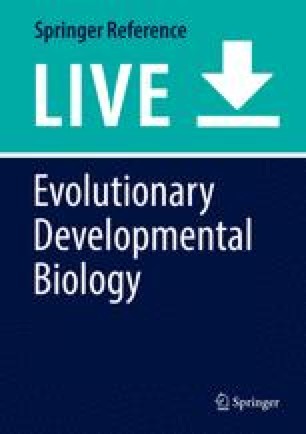 Methods and Practices in Paleo-Evo-Devo

Paleo-evo-devo is the discipline studying the developmental biology of fossil organisms and its evolutionary implications. In adopting a paleo-evo-devo approach, fossils have to be understood as once-living organisms, and the developmental patterns of extant organisms have to be comparatively investigated. For some types of fossils, it is comparably easy to investigate ontogeny, as they preserve earlier portions of the process throughout their entire life, for example as growth lines, or as they have been fossilized while bearing offspring inside their bodies. Yet, in most cases the ontogeny of fossil organisms (and also of some extant ones) has to be reconstructed based on plausibility. Major aspects for this approach are increasing differentiation or number of structures as well as continuity in development. Despite the difficulties in reconstructing the ontogenies of fossil organisms, studying fossilized development can provide important insights into the evolution of developmental patterns not available only from the study of extant organisms. Also the workflow in the practical work in paleo-evo-devo is shortly outlined.

Paleo-evo-devo or evolutionary developmental paleobiology is a biological discipline combining approaches from developmental biology and paleobiology into an evolutionary framework. The discipline is still developing; the term summarizing the principal approach – paleo-evo-devo – has to our knowledge first appeared in the foreword to Minelli and Fusco in 2008. While some of the principal approaches are definitely significantly older, the comparably recent appearance of a distinct term for such approaches underlines that the discipline is still maturing. In the following, a short outline of paleo-evo-devo is provided (see also Sánchez-Villagra 2012; Urdy et al. 2013).

Paleo-evo-devo is a research field in which data and knowledge from developmental biology and paleontology are combined to draw conclusions about the evolution of a group of organisms. The inclusion of these data can help to explain how the stepwise transformation of morphological characters evolved, especially in lineages where the extant adults possess very distinctly differing morphologies. With such an approach, a more complete view on the evolutionary history of a group of organisms can be achieved (see also Haug and Haug 2016a).

Fossils are remains of once-living organisms. As such, they offer a view into the past. Reconstructing the extinct organism based on its fossil remains is a truly biological task. Although paleontology, the scientific discipline focusing on fossils, is in many modern university curricula deeply nested in the geological sciences, understanding the biology of an extinct organism obviously demands for biological approaches. This is also true for developmental aspects of the extinct organism. Although it might sound trivial, one needs to be aware that also extinct organisms, like living ones, developed from a single cell, then through embryogenesis, were born or hatched, grew up, and ideally reached adulthood. This statement is in fact far from trivial given its consequences: one needs to recognize that a fossil specimen might not necessarily represent an adult. This also means in further consequence that two morphologically differing specimens do not necessarily represent different species, but could potentially represent different developmental stages of the same species. Making this distinction in a specific case is far from simple and has given rise to significant debates in recent years concerning various groups of organisms (e.g., dinosaurs: Horner and Goodwin 2009; arthropods: Haug et al. 2012; cycloneuralian worms: Haug and Haug 2015a; for a detailed discussion see Haug and Haug 2016a). Hence, careful considerations are required within a biological framework, developmental biology included, when trying to identify and interpret a fossil. Such considerations are therefore some of the basic tasks for paleo-evo-devo.

Reconstructing the Ontogeny of a Fossil Organism

In general, one could assume that paleo-evo-devo faces three major methodological problems: (1) the problem of reconstructing ontogenies; (2) the problem of recognizing conspecifity; and (3) how problems 1 and 2 are to be confronted in the case of fossils. Problems 1 and 2 are highly interlinked and are often part of an iterative process where first an ontogenetic series is reconstructed and only after certain inconsistencies in this series may lead the researcher to conclude that there are in fact two species in the sequence. The specimens included into the ontogenetic sequence are sorted again, and two ontogenetic sequences are reconstructed, which are again checked for consistency (see the example in Haug et al. 2010a, where Cambrian specimens originally described as one crustacean species turned out to be two species). Hence, in the following no distinctions will be made between these problems.

When dealing with fossils, the important question is: how can we infer how an extinct organism developed throughout ontogeny? Obviously, a direct observation of the developing organism is excluded in fossils. Therefore, one needs to have a look into modern developmental biology and assess which of the approaches used there for observing the development of living organisms can also be applied to fossil organisms.

With such considerations in mind, plausible cases can be constructed that indicate possible conspecifity of morphologically differing specimens, identifying those as different life stages. Such approaches can be applied to fossils as well, but remain plausible assumptions. Therefore, a close comparison to modern forms for which ontogenetic sequences are already (at least partly) available is necessary (but see below, Practical Work, (1) Primary data acquisition).

One also has to accept certain limitations. In a hypothetical case of a progenetic (small-sized larva-like) species and its “normal” sister species, it would most likely not be easy to distinguish reliably between a juvenile of the “normal” species and the adult of the progenetic one. Most likely both would be recognized as a single species. Notwithstanding, such a case mainly demonstrates the possible resolution (or its limitations) of paleo-evo-devo approaches instead of disproving their usefulness.

It is also important to note that in many cases it will be easier to reconstruct certain phases of the ontogeny than others. First of all, the embryonic phase is rarely accessible, but also here notable exceptions have been found, such as ichthyosaur embryos inside the mother or isolated embryos of cycloneuralian worms (Fig. 1; e.g., Donoghue et al. 2006; Haug and Haug 2015a). Larval phases of different animals can be reconstructed comparably reliably, but it is less easy to link them to possible postmetamorphic/non-larval juvenile or adult forms. Non-larval juvenile development can again be comparably easily reconstructed although also here pronounced morphological changes may occur complicating the process. Also in many groups of extant organisms, juvenile development is less well documented than the embryonic or larval phase (and the adult morphology), and therefore often less comparative data are available.

The latter discussed cases for reconstructing the ontogeny of extinct organisms all demand for a large sample size. Yet, in many cases only very few specimens might be available. As pointed out above, in some groups of organisms a single specimen can be informative for its developmental history. In cases in which only a single immature fossil is available, the reliability of any interpretation must be seen as even less strong, but also in such cases some inferences might be possible. When restricting attention to a distinct well-delineated systematic group also information of parts of the ontogeny of clearly nonconspecific specimens might be important. In the right framework even the finding of a single specialized immature form may be telling.

Even though a reconstructed ontogenetic sequence of a fossil organism remains less reliable than that of (many) modern forms, there is still a benefit in reconstructing it. In former times, fossils have played the sole role for reconstructing the evolutionary history of a systematic group. The advent of Hennigian phylogenetic systematics has provided a framework in which it is possible to reconstruct evolutionary history on the basis of the comparison of extant forms, partly pushing fossils away from the prime position. Still, fossils indeed provide crucial insights that cannot be simply inferred from extant forms:

In the following, practical aspects of performing paleo-evo-devo studies are presented. In the four steps of the workflow, the primary data are acquired, developmental sequences are reconstructed, followed by a proximate and an ultimate interpretation.

We would like to thank curators and collection managers from different museums providing specimens (see figure captions). Furthermore, we are grateful to Roger Frattigiani, Laichingen, for providing the crab megalopa from Solnhofen limestones. JTH was supported by the German Research Foundation (DFG HA 6300/3-1); CH was supported by the LMU through a Bavarian Equal Opportunities Sponsorship (BGF). Both authors would like to thank J.M. Starck, Munich, for his support.